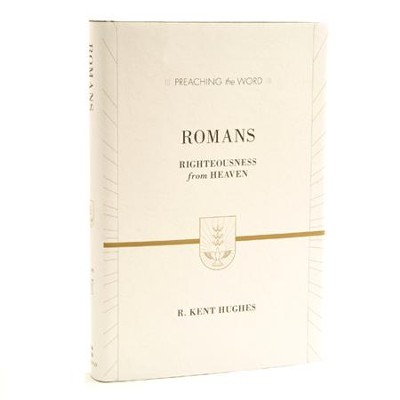 ▼▲
Few Christians would dispute that the book of Romans is one of the most powerful and in?uential books ever written. After all, Paul's epistle has been the written force behind some of the most significant conversions of church history: St. Augustine was convicted of his sin after reading some verses from the thirteenth chapter; Martin Luther recovered the doctrine of salvation by faith from his study of Romans 1:17; John Wesley felt his heart "strangely warmed" and transformed while listening to the reading of Luther's preface to the book of Romans; and John Bunyan was so inspired as he studied the great themes of Romans that he wrote the immortal Pilgrim's Progress. There is no doubt about the power of the book of Romans.

Pastor Kent Hughes invites us now to experience the same power that was exhibited in the lives of great Church leaders such as Augustine, Luther, Wesley, and so many others. The fundamental truths expressed in Paul's letter--the themes of justification by faith, abounding grace, and freedom from sin-come to life as we explore the book that has so challenged and nourished followers of Christ for centuries.

This commentary on Romans, redesigned with a new cover and updated ESV Bible references, explores justification by faith, freedom from sin, substitutionary atonement, and God’s adoption of sinners.

▼▲
I'm the author/artist and I want to review Romans: Righteousness from Heaven (Preaching the Word).
Back
Back