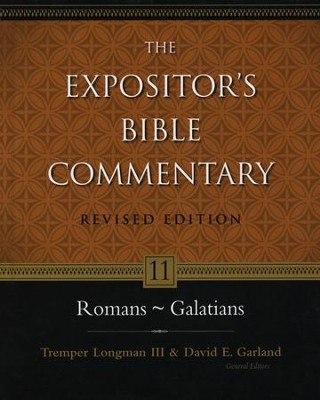 ▼▲
This award-winning, NIV-based, verse-by-verse commentary has been revised to reflect current evangelical scholarship, theological discussions, and critical issues. Each book includes comprehensive introductions, detailed outlines, insightful exposition of passages and verses, and short, precise bibliographies. Each contributor is committed to the divine inspiration, complete trustworthiness, and full authority of the Bible. This volume is based on the NIV version, and wherever specific biblical words are discussed, the Goodrick-Kohlenberger (G/K) numbers have been added.


Everett F. Harrison was founding faculty member of Fuller Theological Seminary, where he served as professor of New Testament for some thirty years, up to the time of his retirement in the late 1970s. Before that, he was a Presbyterian minister and also taught at Dallas Theological Seminary.


Donald A. Hagner is the George Eldon Ladd Professor of New Testament at Fuller Theological Seminary, Pasadena, where he has taught for nearly thirty years. He is a graduate of Fuller, where he studied with Everett Harrison and George Ladd, and of Manchester University, where he studied with F. F. Bruce. Among his writings are commentaries on Hebrews and Matthew.

Verlyn D. Verbrugge (PhD, University of Notre Dame) served as senior editor-at-large for biblical and theological resources at Zondervan until his death in 2015. He published a number of articles and was general editor of the acclaimed New International Dictionary of New Testament Theology, Abridged Edition. He is the author of several books, including Paul and Money and A Not-So-Silent-Night.

▼▲
Continuing a Gold Medallion Award-winning legacy, this completely revised edition of The Expositors Bible Commentary series puts world-class biblical scholarship in your hands. Based on the original twelve-volume set that has become a staple in college and seminary libraries and pastors studies worldwide, this new thirteen-volume edition marshals the most current evangelical scholarship and resources.

The thoroughly revised features consist of:

▼▲
I'm the author/artist and I want to review Romans-Galatians, Revised: The Expositor's Bible Commentary.
Back
Back