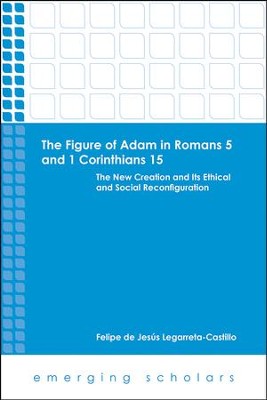 Buy Item $58.19
In Stock
Quantity:
Stock No: WW470017
Fortress Press / Paperback
Quantity:
Add To Cart
of These in Your Cart

The Figure of Adam in Romans 5 and 1 Corinthians 15: The New Creation and its Ethical and Social Reconfigurations

▼▲
It is widely recognized that in some of his letters, Paul develops a Christology based on a comparison between Adam and Christ, and that this Christology has antecedents in Jewish interpretation of Genesis 1-4. But Paul was not concerned simply to develop themes found in scripture.

Felipe Legarreta gives careful attention to patterns of exegesis in Second-Temple Judaism and identifies, for the first time, a number of motifs by which Jews drew ethical implications from the story of Adam and his expulsion from Eden. He then demonstrates that throughout the "Christological" passages in Romans and 1 Corinthians, Paul is taking part in a wider Jewish exegetical and ethical discussion regarding life in the new creation.

▼▲
I'm the author/artist and I want to review The Figure of Adam in Romans 5 and 1 Corinthians 15: The New Creation and its Ethical and Social Reconfigurations.
Back
×