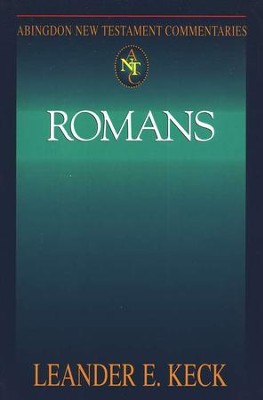 ▼▲
Leander E. Keck asserts that because Romans is part of the New Testament, we can compare it with the other letters ascribed to Paul, as well as with what Acts reports about his message and mission. But the first readers of Romans had only this letter; they could compare it only with what they may have heard about him. While this commentary does from time to time compare Romans with what Paul had said before, it concentrates on Romans itself; what Paul says in this text should not be conflated withnor inflated into--what he thought comprehensively, though it is essential to understand that as well.

▼▲
Leander E. Keck, convener of the Editorial Board and Senior New Testament Editor, is Winkley Professor of Biblical Theology Emeritus at Yale Divinity School. Moody Smith, a George Washington Ivey Professor of New Testament at The Divinity School, Duke University. Emory University Pheme Perkins is a professor in the Theology Department at Boston College, specializing Johannine materials, Paulline Epistles and Gnosticism. She is a member of and leader in several professional organizations, including the Society of Biblical Literature, the Catholic Bible Association, the Society of New Testament Studies, and the Association of Theological Schools. Recent publications include: Gnosticism and the New Testament (Fortress Press), Peter: Apostle for the Whole Church (Fortress Press), Ephesians: Abingdon New Testament Commentary (Abingdon Press), Abraham's Divided Children: Galatians and the Politics of Faith (Trinity Press International).

▼▲
I'm the author/artist and I want to review Romans: Abington New Testament Commentaries [ANTC].
Back
Back