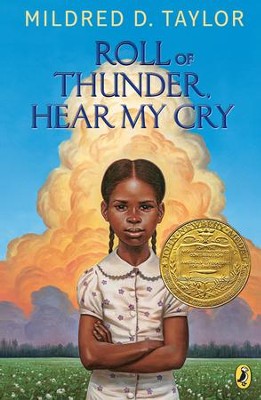 Roll of Thunder, Hear My Cry

▼▲
More than a work of fiction, this is a story culled from Mildred D. Taylor's own family's life and it stands as an important record of an African-American experience from our country's complicated and not-so-distant past. Though fictionalized, the novel draws great strength from a foundation of real-life events - and yet, remarkably, its honest portrayal of harsh truths have lead some to seek to remove the book from the library shelves and school reading lists. Ms. Taylor eloquently addresses this important issue in her inspiring new forward for the anniversary edition.

Translated into scores of languages, this monumental novel remains as meaningful and universal as when it was first published in 1976. Recommended for ages 10 and up. The 1977 Newbery Medal winner.

With the land to hold them together, nothing can tear the Logans apart.

Why is the land so important to Cassie's family? It takes the events of one turbulent year—the year of the night riders and the burnings, the year a white girl humiliates Cassie in public simply because she is black—to show Cassie that having a place of their own is the Logan family's lifeblood. It is the land that gives the Logans their courage and pride, for no matter how others may degrade them, the Logans possess soemthing no one can take away.


"[Taylor] writes not with rancor or bitterness of indignities, but with pride, strength, and respect for humanity."—The New York Times Book Review

"The vivid story of a black family whose warm ties to each other and their land give them strength to defy rural Southern racism during the Depression . . . Entirely through its own internal development, the novel shows the rich inner rewards of black pride, love, and independence despite the certainty of outer defeat."—Booklist, starred review

▼▲
Mildred D. Taylor is the author of nine novels including The Road to Memphis, Let the Circle Be Unbroken, The Land, The Well, and Roll of Thunder, Hear My Cry. Her books have won numerous awards, among them a Newbery Medal (for Roll of Thunder, Hear My Cry), four Coretta Scott King Awards, and a Boston Globe-Horn Book Award. Her book The Land was awarded the L.A. Times Book Prize and the PEN Award for Children's Literature. In 2003, Ms. Taylor was named the First Laureate of the NSK Neustadt Prize for Children's Literature. Ms. Taylor now devotes her time to her family, writing, and what she terms "the family ranch" in the foothills of the Rocky Mountains.


Kadir Nelson (www.kadirnelson.com) is a two-time Caldecott Honor Award recipient. He has received an NAACP Image Award, a CASEY Award, the 2009 and 2014 Coretta Scott King Author Award, and the 2009 Robert F. Sibert Informational Book Award. Among Mr. Nelson's other awards are gold and silver medals from the Society of Illustrators. His work has appeared in The New York Times, Sports Illustrated, and The New Yorker. He lives in Los Angeles.

▼▲
"The vivid story of a black family whose warm ties to each other and their land give them strength to defy rural Southern racism during the Depression. . . . Entirely through its own internal development, the novel shows the rich inner rewards of black pride, love, and independence despite the certainty of outer defeat." —Booklist (starred review)

"The strong, clear-headed Logan family . . . are drawn with quiet affection and their actions tempered with a keen sense of human fallibility."—pointer, Kirkus Reviews

"The events and setting of the powerful novel are presented with such verisimilitude and the characters are so carefully drawn that one might assume the book to be autobiographical, if the author were not so young."—The Horn Book


From the Paperback edition.

▼▲
I'm the author/artist and I want to review Roll of Thunder, Hear My Cry.
Back
Back