Skip to main content
The Rock, the Road, and the Rabbi Study Guide with DVD
By: Kathie Lee Gifford
Stock No: WW095045 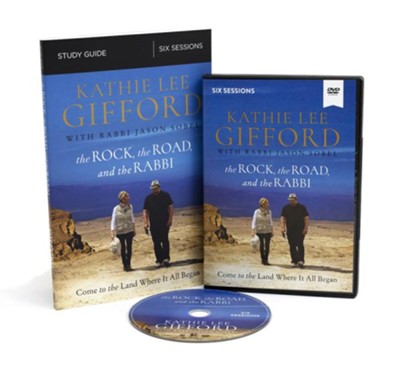 The Rock, the Road, and the Rabbi Study Guide with DVD

Based on her book, The Rock, the Road, and the Rabbi (SKU: 215967), Kathie Lee Gifford takes you on a journey through the Jewish roots of Jesus and the ancient paths of Israel in this 6-session DVD study. You'll learn more about the Rock (Jesus Christ), explore the Road (Israel), and dig deeper into the Bible with the Rabbi (God's Word).

When she began studying the biblical texts in their original Hebrew and Greek and hiking the ancient paths of Israel, Kathie Lee discovered a deeper understanding of the Bible and of God Himself. Throughout the study, Messianic Jewish Rabbi Jason Sobel provides additional insight into the Hebrew language, culture, and heritage will open your eyes to the Bible like never before.  This Study Pack includes one DVD with the six video sessions and one copy of the study guide.

Kathie Lee Gifford always believed the Bible held the answers to every question a person could ask.

Her problem was, how could she be sure of what the Bible was really saying, when we are so separated from the ancient Jewish culture in which it was written?

As a lifelong student of Scripture, Kathie Lee Gifford has always desired a deeper understanding of God’s Word and a deeper knowledge of God Himself. But it wasn’t until she began studying the biblical texts in their original Hebrew and Greek—along with actually hiking the ancient paths of Israel—that she found the fulfillment of those desires.

In this six-session video study, Kathie Lee invites you to join her as she visits sites in Israel that have impacted her life. As she shares her story, Rabbi Jason Sobel, a messianic Jewish rabbi who was trained in the ancient rabbinical way, provides fascinating background details into the language, culture and heritage that make the story of the New Testament come alive. Kathie Lee and Rabbi Sobel will take you and your group beyond the typical "Sunday school" teaching to examine the original texts of the Bible.

Now you can walk with Kathie on a journey through the spiritual foundations of her faith:

Come! Explore the land of Israel and mine the treasures of God's Word. There is so much more!

Kathie Lee Gifford, four-time Emmy Award winner, is best known for her eleven years cohosting the popular fourth hour of the Today show alongside Hoda Kotb. Gifford continues to pursue her dreams as an actress, singer, songwriter, playwright, producer, and most recently, director. She has authored numerous books, including her most recent children’s book, The Gift That I Can Give, and five New York Times bestselling books, including The Rock, the Road, and the Rabbi, It’s Never Too Late, and looks forward to the upcoming release of The Jesus I Know.

Rabbi Jason Sobel is the founder of Fusion Global, a ministry that seeks to bring people into the full inheritance of the faith by connecting treasures of "the old and the new." Rabbi Jason’s voice is authentic, being raised in a Jewish home, and qualified by years of diligent academic work, he received his rabbinic ordination from the UMJC (Union of Messianic Jewish Congregations) in 2005. He has a B.A. in Jewish Studies (Moody) and an M.A. in Intercultural Studies (Southeastern Seminary). He is a sought-after speaker and the author of Breakthrough, Aligning with God’s Appointed Times, Mysteries of the Messiah, and coauthor of New York Times bestseller The Rock, the Road, and the Rabbi with Kathie Lee Gifford.

▼▲
I'm the author/artist and I want to review The Rock, the Road, and the Rabbi Study Guide with DVD.
Back
Back