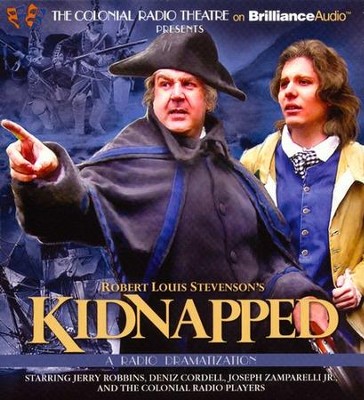 ▼▲
Spirited, romantic, and full of danger, Kidnapped is Robert Louis Stevenson's classic of high adventure. Beloved by generations, it is the saga of David Balfour, a young heir whose greedy uncle connives to do him out of his inherited fortune and plots to have him seized and sold into slavery. But honor, loyalty, and courage are rewarded; the orphan and castaway survives kidnapping and shipwreck, is rescued by a daredevil of a rogue, and makes a thrilling escape to freedom across the wild highlands of Scotland.
Unabridged audio CD; approximately 2 hours 17 minutes; 2 CDs; performed by Jerry Robbins and The Colonial Radio Players.

▼▲
David Balfour has never had an adventure, never sailed the high sea, nor fought in a battle - that changes after the death of his parents. Now he must collect his inheritance from his father's younger brother, and assume his station as man of wealth and standing, but that is not as simple as it sounds. He must first survive and outwit his treacherous uncle to gain what is rightfully his.

▼▲
Robert Louis Stevenson (1850-1894) was a Scottish novelist, poet, and essayist. His most popular works include Treasure Island, A Child’s Garden of Verses, The Strange Case of Dr. Jekyll and Mr. Hyde, and Kidnapped.

▼▲
I'm the author/artist and I want to review Robert Louis Stevenson's Kidnapped: A Radio Dramatization on CD.
Back
Back