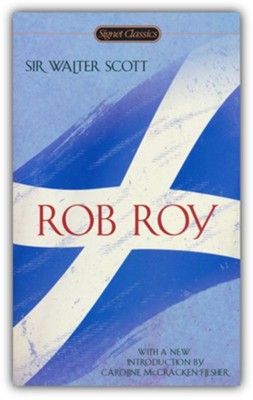 ▼▲
Outlaw Rob Roy MacGregor comes alive in this classic epic of the Scottish borderlands. The narrative follows the adventures of Frank Osbaldistone, a businessman’s son who falls out of favor with his father and is sent to stay in Scotland. English and Protestant, Frank has never felt more out of place, but the wild and noble land intrigues him. And he is immediately drawn to the powerful, enigmatic figure of Rob Roy, who, alongside his fiercely passionate wife, fights for justice and dignity for all of Scotland. Twists of plot, a romantic outlaw’s cunning escapes, and uprisings against England make this a classic epic. At the same time, Frank’s fervent but forbidden love for a Catholic girl makes it a breathtaking romance. Combine these elements with superb period detail, and one has an incomparable portrait of the haunted Highlands, a legendary hero, and a glorious Scottish past.

With a New Introduction by Caroline McCracken-Flesher and an Afterword by A. N. Wilson

▼▲
Sir Walter Scott (1771–1832) was born in Edinburgh, educated for the law, and employed as a government official for thirty years. His lifelong interest in Scottish antiquity and the ballads that recorded Scottish history led him to try his hand at narrative poems of adventure and action. The Lay of the Last Minstrel (1805), Marmion (1808), and The Lady of the Lake (1810) made his reputation as one of the leading poets of his time. Waverly, a novel he had begun in 1805, was published in 1814 and catapulted the author to transatlantic fame. The most famous of his many novels are Old Mortality (1815), Rob Roy (1817), Ivanhoe (1819), Kenilworth (1821), and Quentin Durward (1823). In recognition of his literary work, Scott was made a baronet in 1819. During his last years, he held various official positions and published biographies, editions of Swift and Dryden, tales, lyric poetry, and various studies of history and antiquity.

Caroline McCracken-Flesher is a Professor of English at the University of Wyoming. Her publications include Possible Scotlands: Walter Scott and the Story of Tomorrow, The Doctor Dissected: A Cultural Autopsy of the Burke and Hare Murders, the edited volumes Culture, Nation and the New Scottish Parliament, Scotland As Science Fiction, and the MLA volume Approaches to Teaching the Works of Robert Louis Stevenson. She will give the annual talk on Scottish Literature at the Scottish Parliament in 2015.

A. N. Wilson was born in 1950 and educated at Rugby and New College, Oxford. A Fellow of the Royal Society of Literature, he has held a prominent position in the world of literature and journalism. Among his acclaimed biographies are Lives of Sir Walter Scott (John Llewellyn Rhys Prize), Tolstoy (Whitbread Award for Biography), C. S. Lewis, Hilaire Belloc, and Iris Murdoch. The Victorians, his study of the Victorian Age, and its sequel, After the Victorians, were both published to the widest critical acclaim, and he is the award-winning author of such novels as My Name Is Legion and The Healing Art.

▼▲
"When I think of Rob Roy, I am impatient with all other novels."—Robert Louis Stevenson

▼▲
I'm the author/artist and I want to review Rob Roy.
Back
×