Rob Bell and a New American Christianity
By: James Wellman 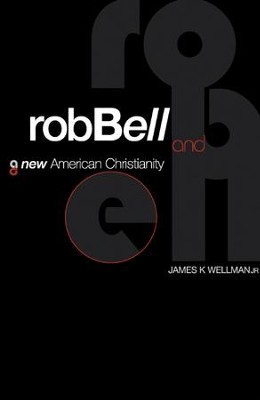 ▼▲
Is Rob Bell a bellwether of where contemporary Christianity is heading? Why does his style and message so resonate with young people? Are his views mainstream, or is he skirting the edges of orthodoxy? How much of Bell is substance, how much is hype? A serious, evenhanded assessment. 168 pages, softcover.

▼▲
ROB BELL
Subversive? &bull; Celebrity? &bull; Radical? &bull; Heretic? &bull; Holy Man?
Before being featured in Oprah's Super Soul Sunday and making the cover of Time Magazine, Rob Bell caused the entire evangelical world to wrestle with the scope of salvation with one daring question: who gets to be saved?
For religious progressives, Bell – the star of the influential Nooma series, game-changer in the church, and budding TV entrepreneur – offers a passionate faith, a prophetic challenge, a biblical acuity, and a generous vision of who God is in the world. For conservatives, Bell’s the voice that young Christians are looking for—a person who takes science seriously, speaks at cutting edge of popular culture, and argues God is bigger than our language for him.
The Christian message needs a new interpreter: one particular enough to embody the tradition but broad enough to evoke thought and feeling from a range of people, including evangelicals, religious progressives, and those disenchanted with churched religion—the spiritual but not religious, who find themselves compelled by Bell’s charisma and artistic creations.
Rob Bell offers a beautiful Jesus that entices, absorbs and inspires individuals to go beyond the back-biting and turf-fighting and culture wars that plague contemporary forms of evangelical and liberal Christianity.
Author, scholar, and speaker James Wellman offers an incisive and critical look at Rob Bell: his influence, his roots, his brand. Wellman's explains Bell’s rhetoric, ponders the implications of his creative message-making, and provides an interpretation of his influence that puts Bell at the center of a new American Christianity.
Praise for Rob Bell and a New American Christianity
As evangelicalism of the twenty-first century continues its centuries-long quest for speaking the cultural idiom, Rob Bell’s voice has emerged as one of the most significant – and controversial. James Wellman’s prodigious research and astute analysis helps us understand why. –Randall Balmer, Dartmouth College, Author of The Making of Evangelicalism
"Twenty years from now we may look back on Rob Bell as the man who forever changed the face of American evangelical Christianity. Thank God, then, for James Wellman's profile of this complex, controversial, and utterly compelling religious leader. This is a book that should be read by all Americans regardless of their religious affiliation." –Reza Aslan, author of No god but God and Beyond Fundamentalism
"Rob Bell is a phenomenon. The emotional outpouring evidenced in both his critics and supporters demonstrate that his work has isolated and exposed a crisis that exists within the Evangelical community. A crisis that, once brought to the surface, has the potential of short circuiting fundamentalist strains within the movement and clearing the path for a theological reformation. This book is among the first to provide an insight into the development of Bell's thought and chart the significance of his intervention in the rocky landscape of Christian culture." –Peter Rollins, author of How (Not) to Speak of God, Insurrection: To Believe Is Human To Doubt is Divine
"Much more than a biography, Wellman uses the life of Rob Bell to reveal the inner logic of a growing orthodoxy in American Christianity. Wellman traces the maturing of this charismatic preacher from an earnest young pastor to a nuanced bestselling "heretic"—and in doing so maps the development of a more ambiguous, more open evangelicalism. This remarkably readable study of Bell’s ministry illuminates the controversies, connects the histories, and explains the theologies. As the most public figure manifesting the transformation of American evangelicalism, Bell’s less dogmatic, more relational faith may hold the key to its sustainable future. Even those familiar with his ministry will find new insights and come away with a deeper sense of Rob Bell’s intimate connection to the developing history of modern Christianity." –Gerardo Marti,  L. Richardson King Associate Professor of Sociology at Davidson College, and author of A Mosaic of Believers and Hollywood Faith

▼▲
James K. Wellman, Jr. is Associate Professor and Chair of the Comparative Religion at the Jackson School of International Studies. His areas of expertise are in American religious congregations, culture, history, and politics. He has published an award-winning book, The Gold Church and the Ghetto: Christ and Culture in Mainline Protestantism (Illinois 1999). He has published two edited volumes: The Power of Religious Publics: Staking Claims in American Society (Praegers 1999), and Belief and Bloodshed: Religion and Violence Across Time and Tradition (Rowman and Littlefield, 2007). His most recent book is Evangelical vs. Liberal: The Clash of Christian Cultures in the Pacific Northwest, published by Oxford University Press. The book received Honorable Mention for the 2009 Distinguished Book Award by the Society for the Scientific Study of Religion (second out of twenty-six books nominated). He is also the project director of a $300,000 grant from the Luce Foundation which will soon culminate in an edited volume called Religion and Human Security: A Global Perspectivewhich will be published soon by Oxford University Press. A new book project with Oxford University Press is called High on God: How the Megachurch Conquered America. It is a based on a national survey of twelve national megachurches, examining the power of desire in these congregations, both toward each other, toward the churches' leadership, and towards God. Wellman knows American Protestantism well, and he is very interested in the future of American churches and, in particular, the trajectory of the evangelical church. Having done extensive work on Protestant leaders, church movements, and successful churches, he is perfectly situated to write a cultural biography of Rob Bell, believing, as he does, that Bell embodies and will lead the evangelical church in America in the next twenty years.

▼▲
I'm the author/artist and I want to review Rob Bell and a New American Christianity.
Back
×
Back
×