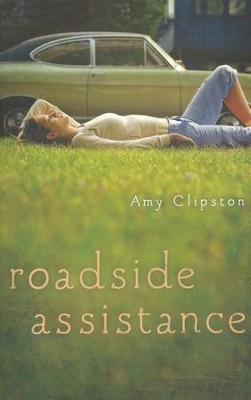 ▼▲
When Emily Curtis' mom dies, the hospital bills force her and her dad to move to her wealthy aunt's house. Emily, who's used to getting her hands dirty working on cars, isn't used to the way her aunt is trying to make her over into the perfect girly girl, just like her cousin Whitney. Things start to look up when she meets a fellow car buff her age and they work on cars together . . . but will the hole in her heart ever fill up? Emily learns that sometimes the help you need can come from the person you least expect.

A very bumpy ride. Emily Curtis is used to dealing with her problems while under the hood of an old Chevy, but when her mom dies, Emily’s world seems shaken beyond repair. Driven from home by hospital bills they can’t pay, Emily and her dad move in with his wealthy sister, who intends to make her niece more feminine—in other words, just like Whitney, Emily’s perfect cousin. But when Emily hears the engine of a 1970 Dodge Challenger, and sees the cute gearhead, Zander, next door, things seem to be looking up. But even working alongside Zander can’t completely fix the hole in Emily’s life. Ever since her mom died, Emily hasn’t been able to pray, and no one—not even Zander—seems to understand. But sometimes the help you need can come from the person you least expect.

▼▲
Tomboy Emily Curtis lost her ability to pray when her mother died. Overwhelmed by hospital bills that they can’t pay, Emily and her dad are forced to move in with Emily’s aunt and her perfect cousin, Whitney. Things seem to be going from bad to worse until she meets cute next-door neighbor Zander and his 1970s Dodge Challenger. Emily has never felt as at home as she does working under the hood of a car. Can Zander help her find her faith again? VERDICT Clipston, the best-selling author of the “Kauffman Amish Bakery” series, makes her young adult fiction debut with glowing results. Emily’s angst over losing her mother and being compared to her more feminine cousin is palpable. Engaging characters and abelievable story line make this a sure bet for teens who enjoy Melody Carlson. It will also appeal to adult readers of YA fiction.
In her first novel for teens, adult author Clipston (the Kaufmann Amish Bakery series) presents the conventional spiritual journey of 17-year-old Emily, whose life has been uprooted since her mother's death from cancer: Emily's father's auto shop went belly up, they lost their house to foreclosure, and had to sell the beloved '69 Camaro she had fixed up. And moving in with her wealthy aunt, uncle, and beautiful cousin Whitney (to whom she has always been compared) makes Emily feel like a charity case. Emily rebuffs repeated invitations from Whitney and her friends, the pastoral staff at their new church, and her father, preferring to stay in her room writingjournal entries to her mother and pondering her uncertain relationship withGod. A developing friendship with Zander, a cute neighbor who shares her passion for cars, provides some solace, but she finds his strong Christian faith unnerving. Emily's struggles with grief, difference, dependency, and the need for someone to depend on provide opportunities for growth, friendship, and budding romance. The story follows a predictable course, but the characters are well developed and it remains affecting. Ages 13–16. (May)

▼▲
I'm the author/artist and I want to review Roadside Assistance #1.
Back
×
Back
×