Skip to main content
SPRING CYBER EVENT STARTS NOW: And it's a really BIG deal! Up to 88% off through 5/24>
God's Rivals: Why Has God Allowed Different Religions? Insights from the Bible and the Early Church
By: Gerald R. McDermott
Stock No: WW825646 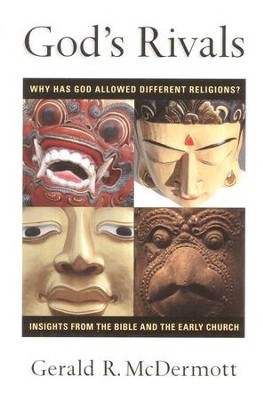 God's Rivals: Why Has God Allowed Different Religions? Insights from the Bible and the Early Church

▼▲
Has God revealed himself only to the ancient Hebrews? How did Old Testament writers view the gods of surrounding nations? Can we learn more about God by studying other world religions? What did early church fathers Justin Martyr, Irenaeus, Clement of Alexandria, and Origen believe? Eye-opening answers. 192 pages, softcover.

In the providence of God, why are there other religions? Was the God of the Bible wise in allowing for them? Can they serve any purpose? Gerald R. McDermott explores reflection on teaching from the Old and New Testaments and from a number of key teachers from the early church to suggest an answer to this perplexing but intriguing question. In the end McDermott provides considerable insight into the troubling clash of world religions and offers a helpful Christian response.

Gerald R. McDermott (Ph.D., University of Iowa) is professor of religion at Roanoke College in Salem, Virginia. He is the author of Can Evangelicals Learn from World Religions? One Holy and Happy Society: The Public Theology of Jonathan Edwards and Jonathan Edwards Confronts the Gods: Christian Theology, Enlightenment Religion and Non-Christian Faiths.

" God's Rivals presents in engaging, lucid style considerable biblical and historical information unfamiliar to most evangelicals. McDermott helps believers see how they can interact significantly with people in other religious systems."

". . .highly recommended for students and Christian leaders and should be required reading for missionaries and evangelists."

"Every chapter starts with a short summarizing view on the chapter's topic or main protagonist; afterward, step by step, he describes the most important things to know, starting with an interesting example or invented dialogue that easily catches the reader's attention and offers him exciting access to the topic."

". . .a timely, readable book dealing fruitfully with an issue of increasingly critical importance."

". . . A timely, readable book detailing fruitfully with an issue of increasingly critical importance."

"It is this perennial--and perennially controversial--question that McDermott?s new book, God?s Rivals, addresses with the same winsomeness and user-friendly clarity that made the earlier book [ Can Evangelicals Learn from World Religions?] a success."

"This is a fascinating summary and examination og the origin of world religions and how the Bible and the early church fathers perceived them. God?s Rivals provides helpful perspective on sharing Christ?s primacy with clarity and sensitivity."

▼▲
I'm the author/artist and I want to review God's Rivals: Why Has God Allowed Different Religions? Insights from the Bible and the Early Church.
Back
Back