Rite of Passage: A Father's Blessing
By: Jim McBride 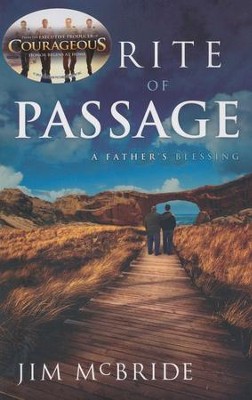 Rite of Passage: A Father's Blessing

▼▲
Adulthood shouldn't be an accident. In an era of aging pre-adults and wandering "adult-olescents," Jim McBride gives parents a practical tool to help launch their own children into their own lives with purpose. This guidebook includes ideas and practical examples for planning your own family rites of passage. Paperback,

For generations, other religions and cultures have put their children through a rite of passage to adulthood. Many people are aware of the Jewish practice of the Bar and Bat Mitzvahs, for example. The reality, however, is that many children today don’t learn how to become adults on purpose; rather, they ride the wave of adolescence toward an unknown adult future.

Moms, dads, and other perfectly placed adults have the unique opportunity to guide the teenagers in their life toward adulthood. This is not a privilege to be taken lightly, but neither is it an impossible task.

Jim McBride, executive producer of Fireproof and Courageous, brings wisdom, experience, and practical examples to his guidebook for leading those burgeoning adults in your life through a real-life Rite of Passage.

▼▲
JIM MCBRIDE joined the staff of Sherwood Baptist Church in 2000 and has served as the executive pastor overseeing operations, church staff, finances and Men's Ministry since 2003. He is an executive producer of the films released by Sherwood Pictures, including Courageous, Fireproof, Facing the Giants, and Flywheel. Jim has also worked for Coca-Cola fifteen years and served in the U. S. Marine Corps for six years. Jim and his wife, Sheila, have been married for 28 years. They have four children, Victoria, Buddy, Tommy, and Sarah.

▼▲
I'm the author/artist and I want to review Rite of Passage: A Father's Blessing.
Back
×
Back
×