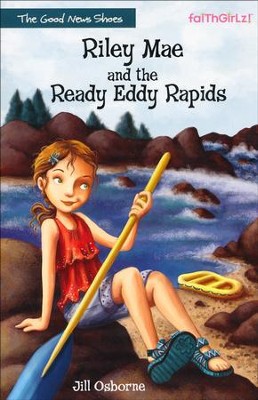 ▼▲
In book two of Jill Osborne's fun new series, Riley Mae and her Swiftriver friends flee to Northwest Montana for protection from an unknown enemy. The rugged surroundings provide the perfect backdrop for a river sandal campaign, and for more opportunities to trust God as Riley learns how to share the Good News with those she loves.

If you’re gonna run for your life,

you gotta wear the right shoes.

Life is rapidly changing for pre-teen shoe spokesperson Riley Mae. After escaping near disaster at the top of Half Dome in Yosemite, Riley, her family, and her Swiftriver co-workers fly to a secret hideout in Northwest Montana. But when the plane’s malfunction leads to a rough landing, Riley wants nothing more than to return to friends, church, and home. Then she meets Sunday, a ten-year-old boy from Kenya who wrestles fish, battles bears, and tackles leukemia. While her rigorous raft training for the marketing campaign brings a few bumps and bruises, Riley now feels up for the challenge.

Everything looks as bright as the glistening fool’s gold on her “Ready Eddy” river sandals, but everything is not as it seems. Riley soon learns that life is as unpredictable as the raging waters, which, if she is not careful, will sweep her away and into the hands of an enemy who is even closer than she thinks.

Jill Osborne works in children’s ministry and has a passion for telling great stories. She has written plays, skits for youth groups and Sunday morning drama teams, curriculum for children’s ministry, countless articles for her church newsletter, and a blog about taking a sabbatical in a motor home. Good News Shoes is her first series for kids, and she plans to run with it!

▼▲
I'm the author/artist and I want to review Riley Mae and the Ready Eddy Rapids.
Back
Back