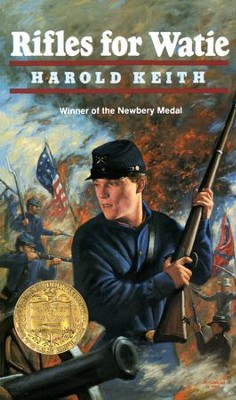 A captivating and richly detailed novel about one young soldier who saw the Civil War from both sides and lived to tell the tale.

Earnest, plain-spoken sixteen-year-old Jeff Bussey has finally gotten his father’s consent to join the Union volunteers. It’s 1861 in Linn County, Kansas, and Jeff is eager to fight for the North before the war is over, which he’s sure will be soon.

But weeks turn to months, the marches through fields and woods prove endless, hunger and exhaustion seem to take up permanent residence in Jeff’s bones, and he learns what it really means to fight in battle—and to lose friends. When he finds himself among enemy troops, he’ll have to put his life on the line to advance the Union cause.

Thoroughly researched and based on firsthand accounts, Rifles for Watie “should hold a place with the best Civil War fiction for young people” (The Horn Book).

A strong choice for independent reading and for sharing in a classroom and for homeschooling. As a homeschool cooperative teacher commented: "The book has launched many discussions in our class. When a person is on one side of a conflict, it is important to remember that people on the other side are also people. Jeff is a perfect model for how treating people with respect can happen even in war."

Harold Keith grew up near the Cherokee country he describes in Rifles for Watie.A native Oklahoman, he was edu-cated at Northwestern State Teachers College at Alva and at the University of Oklahoma.

While traveling in eastern Oklahoma doing research on his master's thesis in history, Mr. Keith found a great deal of fresh material about the Civil War in the Indian country. Deciding he might someday write a historical novel, he interviewed twenty--two Civil War veterans then living in Oklahoma and Arkansas; much of the background of Rifles for Watiecame from the note-books he filled at that time. The actual writing of this book took five years.

Since 1930, the author has been sports publicity director at the University of Oklahoma. He is married and has a son and daughter.

"This full-length junior novel should hold a place with the best Civil War fiction for young people. The fighting takes place in the West. A young farm boy joins the Union forces, becomes a scout, and thus temporarily part of Stand Watie's Cherokee Rebels. There is suspense in the telling and many a colorful character." — Horn Book Magazine

▼▲
I'm the author/artist and I want to review Rifles for Watie - eBook.
Back
Back