Skip to main content
Rhetorical Criticism: Context, Method, and the Book of Jonah
By: Phyllis Trible
Stock No: WW0627989 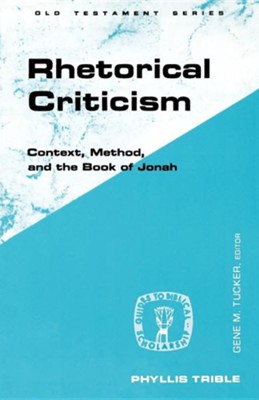 Rhetorical Criticism: Context, Method, and the Book of Jonah

▼▲
Trible's work begins with an historical overview of rhetorical criticism, providing the context for discussion of biblical rhetorical criticism. The book of Jonah is the medium for such further exploration of rhetorical criticism within biblical literature, as Trible analyzes its external design and internal structure. Throughout her discussion, Trible employs the same rhetorical tools she introduces and explains within the body of her text. Adding to the didactic value of the text, appendices are included, one of which outlines the structure of Jonah, the other provides a quiz, testing the reader's ability to single out the rhetorical devices imbedded in Trible's text. A most welcome tool for those interested in biblical interpretation as well as study of the book of Jonah.

Phyllis Trible examines rhetorical criticism as a discipline within biblical studies. In Part One she surveys the historical antecedents of the method from ancient times to the postmodern era: classical rhetoric, literary critical theory, literary study of the Bible, and form criticism. Trible then presents samples of rhetorical analysis as the art of composition and as the art of persuasion.

In Part Two, formulated guidelines are applied to a detailed study of the book of Jonah. A close reading with respect to structure, syntax, style, and substance elicits a host of meanings embedded in text, enabling the relationship between artistry and theology to emerge with clarity.

Rhetorical Criticism has many distinctive features. It is

the first comprehensive treatment of biblical rhetorical criticism as it has emerged within the latter half of the twentieth century.

interdisciplinary in approach, engaging the rhetorical study of the Bible with expanding developments in secular literary criticism (structuralism, poetics, reader-response criticism, and deconstruction, for example) and in the similarly burgeoning field of contemporary rhetoric

itself a model of the rhetorical analysis that it describes

accessible both to the novice and to the scholar

Phyllis Trible is a renowned scholar in the field of feminist biblical scholarship. She has served as the Baldwin Professor of Sacred Literature, Union Theological Seminary, New York, as well as associate dean, professor of biblical studies, and university professor at Wake Forest University, Winston-Salem, North Carolina. Her groundbreaking books include God and the Rhetoric of Sexuality and Rhetorical Criticism.

▼▲
I'm the author/artist and I want to review Rhetorical Criticism: Context, Method, and the Book of Jonah.
Back