Skip to main content
Revival God's Way: A Message for the Church, repackaged edition
By: Leonard Ravenhill
Stock No: WW03029 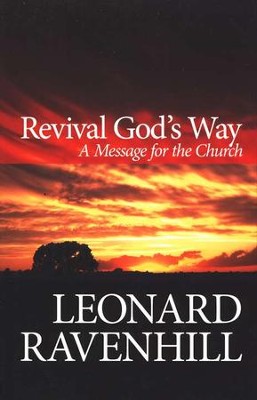 Revival God's Way: A Message for the Church, repackaged edition

▼▲
Written with prophetic zeal, this book will create in the reader a longing for true biblical revival--the kind of sweeping change that revolutionizes individual lives, communities, and sometimes even entire nations. Full of spiritual insights and inspirational challenge, Ravenhill's message for the church is as relevant today as it was a generation ago. His clear and uncompromising voice will be welcomed by those who desire to see the church restored to its original calling--displaying the glory, power, and holiness bestowed by Christ himself on those who represent Him in the world. Paperback, 160 pages.

▼▲
For All Christians Who Yearn for Revival God's Way

This no-compromise biblical clarion call to revival is timeless. Leonard Ravenhill clearly shows how the church can be brought from where it is to where it ought to be. The church still needs his message, first published in 1983, for as Ravenhill said, "We live in a generation which has never know revival--God's way."

The message is drastic, fearless, and often radical. His goal for the church is nothing less than full restoration to the glory, power, holiness, and dignity that Christ intended for it.

▼▲
LEONARD RAVENHILL was born in 1907 in England. He became one of England's foremost evangelists, preaching with vigor and power. He immigrated with his family to the United States in midlife, where he continued his ministry. The author of several books, including Revival God's Way and Revival Praying, he went home to be with the Lord in 1994.

▼▲
Leonard Ravenhills message for the church is to have Revival Gods Way. Ravenhill stresses that revival in the church today is imperative, and the importance of prayer in revival is immeasurable: prayer needs to come first from the clergy and then from the people. The style of the book is very distinct. There are many allusions to somewhat obscure biblical events and teachings, but this will not hinder the average reader from getting the gist of the message. However, this definitely leads to the conclusion that this is a thinking book.

Ravenhill speaks very passionately. In his boldness, his tone is reminiscent of the fire-and-brimstone evangelists of the turn of the 20th century. He speaks of the much-deserved condemnation of apathy and laziness in the church and its ministers. He speaks briefly against abortion, homosexuality, and Mormonism. Included with Mormonism is any religion that distorts the truth of the Bible. All this he does without apology.

The author draws from a vast arsenal to write this book. He has an incredible mastery of the English vocabulary, its proper usage, and how to turn a good phrase; he uses poetry and also quotes from other theological material to make his point; and he uses history by referencing the lives of past evangelists and their stories. This is the second edition of the book, with the first written in 1983. Leonard Ravenhill died in 1994. Although some of the issues mentioned in the book (such as the power of communism) are only mentioned briefly, they do date the contents of the book slightly.

One concern that arises is that Ravenhill so adamantly advocates prayer, that he almost turns it into something in the church seemingly more important than seeking God. Here is the explanation: Ravenhill is very firm that materialism and worship of things needs to be put aside, but in his incessant voicing of the importance of prayer, he seems to lose sight of the importance of God. There is definitely a place for his voice of condemnation for the church and its lack of prayer, but it is important to think about God having attention and not the seeking after of prayer as though prayer were God.

Revival Gods Way can best be appreciated by someone familiar with even obscure biblical references and also an ability to think deeply about Ravenhills words without being turned off by his fire-and-brimstone tone.  Kristi Meyers, Christian Book Previews.com

▼▲
I'm the author/artist and I want to review Revival God's Way: A Message for the Church, repackaged edition.
Back
Back