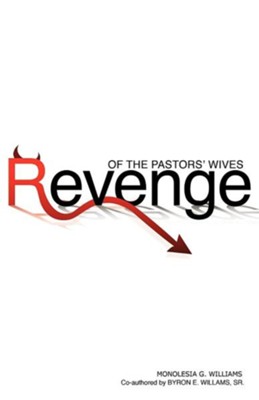 Revenge of the Pastors' Wives

▼▲
Revenge of the Pastors Wives By Monolesia Graves Williams Pastor Byron E. Williams, Sr., Co-Author Gail McGregor has been married to a pastor long enough to know all about the foibles and fantasies surrounding the unofficial title of First Lady. The expectations of being a pastors wife were too high; the rewards, too low. During her marriage to a pastor, she has experienced tears and tragedies, unfulfilled days and lonely nights, doctors visits, tranquilizers and even a nervous breakdown. All the problems involved with being married to a man of God have driven her to wits end. Having already sought out every avenue she knows to find understanding, genuine acceptance and love, she now devises her own form of copingrevenge. Having secured a few comrades, she embarks on a vengeful journey that leads to the most unlikely places] She soon discovers that although revenge is a dish best served cold, true vengeance should be left in much larger Hands than her own. Thanks to contributing writer Blessing Williams, daughter of the authors Monolesia Williams, married to Pastor Byron Williams, has been a pastors wife for fifteen years. She grew up in Brenham, Texas. Monolesia was pronounced Urban Spotlight International winner by the Gospel Music Association in August 2001 at Estes Park, Colorado. She received an associates degree from Tulsa Community College and a BA degree in speech communications from Northeastern State University. She serves as music director for First UME Church of Newburgh New York. A native of Longview, Texas, Byron Williams has been in ministry over forty years. He has pastored thirty-five years. He received his BA in religion from East Texas Baptist University in Marshall, Texas, and an MTS from Phillips Seminary in Tulsa, Oklahoma. He serves as pastor of Baptist Temple Church of Newburgh, New York.

▼▲
I'm the author/artist and I want to review Revenge of the Pastors' Wives.
Back
×