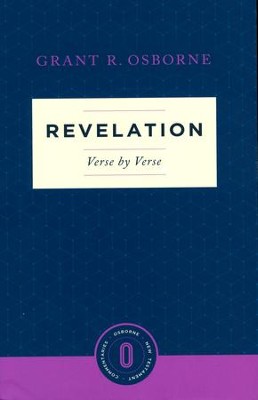 The book of Revelation tends to both fascinate and confuse us with its vivid and strange imagery. When we turn to trusted scholars for help, the widely divergent interpretations of the book can sometimes cause us to throw our hands in the air and stop reading. Are the visions to be taken literally or symbolically? Do they depict events from the first century or are they future, just before Jesus' return?

In Revelation Verse by Verse, resepcted biblical scholar Grant R. Osborne cuts through the confusion and offers a clear exposition of the book, explaining what it meant in its first-century setting and what it means today. Instead of being a frightening or befuddling book, Osborne urges us to see Revelation as highly devotional, causing readers to focus on the sovereignty of God, the futility of Satan, and the ultimate victory of the Lamb and his saints.

The Osborne New Testament Commentaries interpret Scripture verse by verse, bridging the gap between scholarship and the Church. This set of commentaries is for people seeking a straightforward explanation of the text in its context, avoiding either oversimplification or technical complexity. Osborne brings out the riches of the New Testament, making each book accessible for pastors and all who consider themselves students of Scripture.

Grant R. Osborne (Ph.D., University of Aberdeen) is a respected biblical scholar and professor of New Testament at Trinity Evangelical Divinity School in Deerfield, Illinois. He also serves as series editor for the IVP New Testament Commentary Series, for which he contributed the volume on Romans. He has also written on Revelation for the Baker Exegetical Commentary on the New Testament. His seminal work, The Hermeneutical Spiral, has become a standard for biblical interpretation, and as a culmination of his lifes ministry, he's bringing his academic acumen to an accessible, application-focused commentary in the Osborne New Testament Commentary series.

"A well-known writer of New Testament commentaries tackles a well-known New Testament book. The result is an instructive reading of this often-discussed text. Read Osbornes Commentary on Revelation and learn."

"Many people avoid the book of Revelation because it seems strange and its interpretation is controversial. Grant Osborne brings his many years of intense and intelligent study of Revelation to bear in this compelling reading of this books powerful vision of Christs second coming. I recommend it to all readers and especially pastors."

▼▲
I'm the author/artist and I want to review Revelation Verse by Verse: Osborne New Testament Commentaries.
Back
×
Back
×