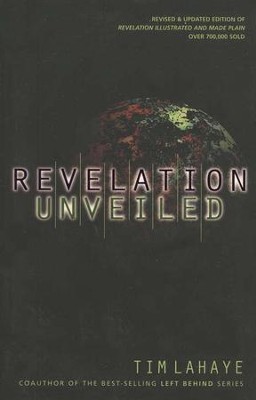 ▼▲
In Revelation Unveiled, Dr. Tim Lahaye, coauthor with Jerry Jenkins of the best-selling novels Left Behind and Tribulation Force, reveals the scriptural foundation of this series. Revelation Unveiled explains such critical topics as: The rapture of the church, the return of Christ, the great tribulation, the final battle against Satan and his hosts, the seven seals, the millenial reign, the seven trumpets, the seven bowls of wrath, the great white throne, the destruction of Babylon, and the new heaven and the new earth. Previously titled Revelation Illustrated and Made Plain, this revised and updated commentary includes numerous charts. With simple and accessible language, Revelation Unveiled will help you better understand this mysterious, final book of the Bible and its implications. Basic overview of Revelation Unveiled: written from a pre-millennial perspective, this non-technical(no knowledge of Greek or Hebrew needed)commentary based on the NIV is geared for students, laypersons, and pastors.

In Revelation Unveiled, Dr. Tim LaHaye, co-author of the best-selling Left Behind series, reveals the scriptural foundation of beloved novels.

In this book, LaHaye explains the biblical topics he and Jerry Jenkins explored in Left Behind:

Previously titled Revelation Illustrated and Made Plain, this revised and updated, verse-by-verse commentary of the book of Revelation includes numerous charts. With simple and accessible language, Revelation Unveiled will help you better understand the mysterious, final book of the Bible and its implications.

Perfect for fans of the Left Behind books and for anyone confused or curious about the book of Revelation.

Tim LaHaye is a New York Times bestselling author of more than 70 nonfiction books, many on biblical prophecy and end-times. He is the coauthor of the record-shattering Left Behind series and is considered one of America's foremost authorities on biblical end-times prophecy.

▼▲
I'm the author/artist and I want to review Revelation Unveiled, softcover.
Back
Back