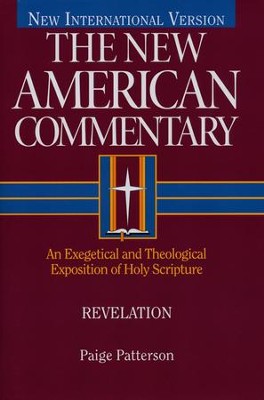 Sample Pages
Out of Stock This product is no longer available and cannot be added to your cart. We apologize for this inconvenience
2.5 out of 5 stars for Revelation: New American Commentary [NAC] (2 Reviews)
No longer available.
Stock No: WW401394
B&H Academic / 2012 / Hardcover
Call

▼▲
Revelation is an exceptionally intimidating book for most ministers and this problem is compounded by the abusive ends to which the book has often been put. Yet, as Paige Patterson argues the people who sit in the pews are curious about Revelation, and it is the minister's or church leader's job to address that curiosity with courage and what Patterson calls "moxie".

To aid this endeavor, Patterson's Revelation in the New American Commentary series tackles the text by unpacking it pericope-by-pericope. Each pericope is easily accessible, makes arguments based on the Greek text, but presents those discussions using only the English. While the original languages are always useful, they are not necessary to access this commentary.

While primary attention is given to the text, Paige does discuss scholarly matters. These, typically, are not of the technical exegetical type but rather deal in the theology derived from the text of Revelation. Thus, Paige's work makes an exegetical argument but does so to posit a theological stance about the book while leaving room for critical interaction from the reader. Paige's work also interacts critically with historic interpreters, drawing on them were useful while discerningly avoiding overly eccentric readings of Revelation. Therefore, Patterson's work is a mid-level, non-technical commentary accessible to teaching laity, ministers, and members with some background in formal biblical studies.

Features of the NAC series:

▼▲
The New American Commentary series is for the minister or Bible student who wants to understand and expound the Scriptures. Notable features of each volume include:

In the Introduction to his commentary on Revelation, L. Paige Patterson observes the widespread neglect of this closing book of the New Testament.
"Aside from a few journal articles and fewer monographs, few homiletical adventurers have evidenced the moxie to enter the eschatological lists and take on this book in the pulpit. This remains the case even though curi- osity abounds in many congregations where parishioners fervently wish that their respective pastors would explain the book to them. Among those who embark on this adventure, most sail no further than the message to the seven churches . . . thus missing the grandeur of the promises that proliferate in chapters 4-22."

Patterson writes with the strong conviction that preachers and professors can grasp Revelation and expound it fruitfully. To that end he has writ- ten this commentary, and in doing so, interacts with a wide array of interpreters of Revelation across the centuries. The reader who follows Patterson’s interpretive decisions will experience a virtual hermeneutical workshop but far more than that. He will see more clearly than ever the glory and grandeur of Jesus Christ.

▼▲
Paige Patterson (Ph.D. New Orleans Baptist Theological Seminary) is president and professor of theology and occupies the L.R. Scarborough Chair of Evangelism ("Chair of Fire") at Southwestern Baptist Theological Seminary. He is also a noted outdoorsman, SCUBA diver, and adventurer, holding membership in Safari Club International and the National Rifle Association.  He is author of commentaries on First Corinthians, First Peter, Titus, and Song of Solomon and numerous articles on various aspects of theology.

▼▲
From the first page of this commentary the reader is raptured out of the mundane things of the twenty-first century and deposited into the ancient yet visionary world of the apostle John. Dr. Patterson doesn't merely offer explanations of the frequently baffling content of John's Revelation. Many have attempted that. Rather, through the visions of John he gives us a vision he gives us a vision of our Lord Jesus Christ. Through the prophetic expectations of the apostle, he raises our confident hope in God's judgment of unrighteousness, and pretribulational rapture of the church, the premillenial return of our Lord, and the coming new heavens and earth blessed with God's dwelling. Take up this book and read. Earthly and heavenly things will never seem the same again.
-D. Jeff Bingham,
Chair, Department of Theological Studies, Dallas Seminary

▼▲
I'm the author/artist and I want to review Revelation: New American Commentary [NAC].
Back
×
Back
×