Revelation and the Politics of Apocalyptic Interpretation
By: Richard B. Hays 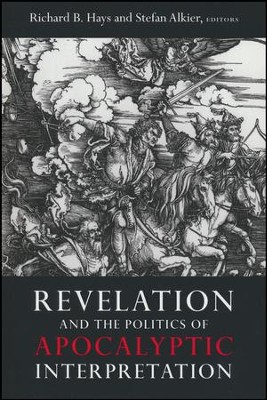 Revelation and the Politics of Apocalyptic Interpretation

John's apocalyptic revelation tends to be read either as an esoteric mystery or a breathless blueprint for the future. Missing, though, is how Revelation is the most visually stunning and politically salient text in the canon. Revelation and the Politics of Apocalyptic Interpretation explores the ways in which Revelation, when read as the last book in the Christian Bible, is in actuality a crafted and contentious word. Senior scholars, including N.T. Wright, Richard Hays, Marianne Meye Thompson, and Stefan Alkier, reveal the intricate intertextual interplay between this apocalyptically charged book, its resonances with the Old Testament, and its political implications. In so doing, the authors show how the church today can read Revelation as both promise and critique.

Richard B. Hays is George Washington Ivey Professor of New Testament at Duke Divinity School. He lives near Durham, North Carolina. His publications include Reading the Bible Intertextually (edited with Stefan Alkier and Leroy A. Huizenga, 2009) and Reading Backwards (2014).

[L]iberally spiced with insights.... [The authors] do a commendable job of striking a balance between the impact of this book on its original recipients and on its modern ones.... Highly recommended.

This volume makes a significant contribution to the scholarly literature on Revelation…full of rich and challenging insights which deserve careful reflection.

... offers a stimulating and constructive engagement with the Apocalypse.

The contributors present a compelling case that there are real political implications in the interpretation and identification of the main message of the Apocalypse.

▼▲
I'm the author/artist and I want to review Revelation and the Politics of Apocalyptic Interpretation.
Back
×
Back
×