Skip to main content
Get Christmas Ready Sale — Over 1,000 deals thru 9/26!
The Return of the God Hypothesis: Compelling Scientific Evidence for the Existence of God
By: Stephen C. Meyer
Stock No: WW071507 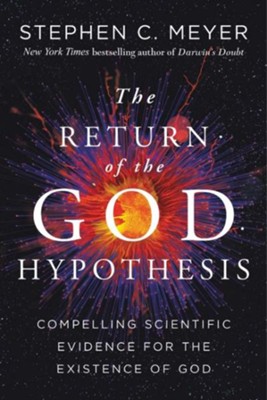 The Return of the God Hypothesis: Compelling Scientific Evidence for the Existence of God

The New York Times bestselling author of Darwin’s Doubt and Intelligent Design scholar presents groundbreaking scientific evidence of the existence of God, based on breakthroughs in physics, cosmology, and biology.

In 2004, Stephen C. Meyer, one of the preeminent scientists studying the origins of life, ignited a firestorm of media and scientific controversy when a biology journal at the Smithsonian Institution published his peer-reviewed article advancing the theory of Intelligent Design. Then, in his two bestselling books, Signature in the Cell and Darwin’s Doubt, he helped unravel a mystery that Charles Darwin did not address: how did life begin? and offered further scientific proof to bolster his arguments on the history of life and our origins, concluding that life was designed.

In those previous books, Meyer purposely refrained from attempting to answer questions about “who” might have designed life. Now, in The Return of the God Hypothesis, he brings his ideas full circle, providing a reasoned and evidence-based answer to the ultimate mystery of the universe, drawn from recent scientific discoveries in physics, cosmology, and biology.

Meyer uses three scientific points to refute popular arguments put forward by the “New Atheists” against the existence of God:

Stephen C. Meyer received his Ph.D. from the University of Cambridge in the philosophy of science after working as an oil industry geophysicist. He now directs the Center for Science and Culture at the Discovery Institute in Seattle, Washington. He authored Signature in the Cell, a (London) Times Literary Supplement Book of the Year.

▼▲
I'm the author/artist and I want to review The Return of the God Hypothesis: Compelling Scientific Evidence for the Existence of God.
Back