Skip to main content
Did the Resurrection Happen . . . Really?: A Dialogue on Life, Death, and Hope - eBook
By: Josh McDowell, Dave Sterrett
Stock No: WW15492EB 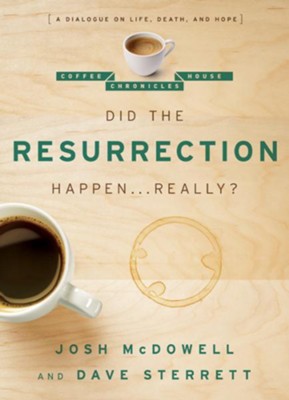 Did the Resurrection Happen . . . Really?: A Dialogue on Life, Death, and Hope - eBook

By: Josh McDowell, Dave Sterrett
More in Coffee House Chronicles Series
Moody Publishers / 2011 / ePub
5 out of 5 stars for Did the Resurrection Happen . . . Really?: A Dialogue on Life, Death, and Hope - eBook (2 Reviews) Write a Review
In Stock
Stock No: WW15492EB

The Coffee House Chronicles are short, easily devoured novellas aimed at answering prevalent spiritual questions. Each book in the series tackles a long-contested question of the faith, and then answer these questions with truth through relationships and dialogue in each story.

In Did the Resurrection Happen, Really?: A Dialogue on Life, Death, and Hope, the college campus is rocked by a shooting spree that leaves nine students dead. Their up-close experience with mortality allies the coffee house discussion group together to really wrestle with the spiritual and eternal ramifications of whether or not Jesus rose from the dead.

The other two books in the series: Is the Bible True, Really? and Who is Jesus, Really? continue the unfolding story at the college campus and the coffee house down the road.

▼▲
JOSH MCDOWELL As a young man, Josh McDowell considered himself an agnostic. He truly believed that Christianity was worthless. However, when challenged to intellectually examine the claims of Christianity, Josh discovered compelling, overwhelming evidence for the reliability of the Christian faith. In 1961 Josh joined the staff of Campus Crusade for Christ International. Not long after, he started the Josh McDowell Ministry to reach young people worldwide with the truth and love of Jesus.

DAVE STERRETT is a conference speaker and writer for a movement called I am Second. Along with ministering in churches, high schools, and college campuses, Dave serves as an adjunct professor of New Testament, Philosophy and Apologetics at Liberty University. In addition to the three book series, Coffee House Chronicles, Dave is the author of Why Trust Jesus? (Moody Publishers) and co-author of the book, "O" God, A Dialogue on Truth and Oprah's Spirituality.

▼▲
I'm the author/artist and I want to review Did the Resurrection Happen . . . Really?: A Dialogue on Life, Death, and Hope - eBook.
Back
×
Back
×