Resurrecting Religion: Finding Our Way Back to the Good News
By: Greg Paul 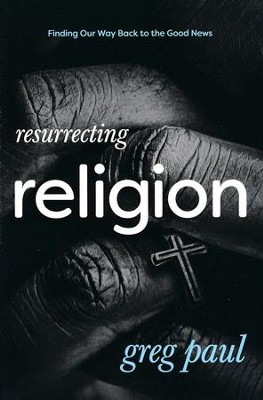 Resurrecting Religion: Finding Our Way Back to the Good News

At a time when people practice their faith in extremes--either publicly, with a legalistic, combative tone that creates division, or privately, to the point that their faith becomes functionally irrelevant--award-winning author Greg Paul casts a new light on religion that is beneficial for believers and the world.

Using the book of James as a guide and the streets of Toronto as a proving ground, Greg Paul demonstrates that true religion is not a necessary evil, but the way we put flesh on the bones of our faith. Resurrecting Religion is a convicting and inspiring vision for a world-changing faith.

▼▲
There’s lots of bad religion out there. But the answer isn’t no religion, it’s true religion: living out—publicly and communally—what we say we believe privately and individually. True religion puts flesh on the bones of faith. Resurrecting Religion offers an inspiring, stretching vision for finding our way back to the good news of our faith.

At a time when most people practice their faith in the extremes—either extremely publicly, with a legalistic, combative tone that creates division, or extremely privately, to the point that our faith becomes functionally irrelevant—award-winning author Greg Paul offers a vision for religion that is good for us and good for the world.

▼▲
Paul (God in the Alley), founding pastor of Sanctuary Toronto, a ministry serving marginalized communities, argues for a new definition of religion in this impassioned call for rethinking the role of Christianity in a community. Decreasing church attendance, divisions over doctrine, hypocritical church members, and the loss of young members have all contributed to Christianity’s declining reputation, Paul writes. He believes that “good religion”—motivated by empowering love, not power, money, or fame—can turn the tide. Instead of using faith politically, he writes, Christianity needs to become welcoming by directing individual faith toward communal good. Paul illustrates his points with examples from his ministry, as with the story of Mike, a homeless man with liver disease whom Paul takes in for a few months. Their time together makes Paul rethink how Sanctuary Toronto works with people who need housing, inspiring him to take a more proactive approach to finding and helping them. Paul also includes inspiring reflections on Bible stories, including the perspective of John, the brother of Jesus, and a gripping (and surprisingly humorous) recounting of the martyrdom of St. Lawrence. Paul’s uplifting message will appeal to Christians looking to reenergize their communities.
Paul, founding pastor of Sanctuary Toronto, a ministry and faith community serving marginalized communities, has written a compelling resource sure to bring the needed wake-up call to those Christians who are quite ignorantly living a functionally irrelevant life. He recounts real-life scenarios of those within his city who have been forgotten, overlooked, and dismissed, and parallels this obvious neglect with Jesus’ call to go to the poor and needy. The author spends ample time explaining what God’s Word has to say about religion—the good and the bad. Paul’s chapter “The Leveling Effect” will especially hit home with middle-class Christians and how they tend to view their finances. In 10 chapters, Christ followers will discover and hopefully put into action fresh steps toward living selflessly and devoting themselves anew to those within their sphere of influence. Paul exposes the faulty beliefs so many Christians cling to out of naivety and perhaps fear before offering a better way to meet the needs of those individuals God brings across their path.

▼▲
I'm the author/artist and I want to review Resurrecting Religion: Finding Our Way Back to the Good News.
Back
×
Back
×