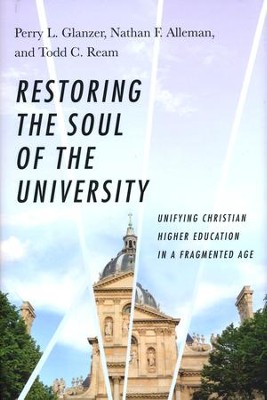 Restoring the Soul of the University: Unifying Christian Higher Education in a Fragmented Age

Universities today often don't have a unifying soul, vision, mission, or identity. Why? And how can schools address this gap as they move into the future? This work explores how institutions of higher learning have various fragmented goals. According to the authors, this is a problem secular universities can't solve-but Christian universities can. However, it will require reimagining excellence in a time of exile, placing the liberating arts before the liberal arts, and focusing on the worship, love, and knowledge of God as central to the university. Restoring the Soul of the University is a pioneering work that charts the history of the university and casts an inspiring vision for the future of higher education.

▼▲
Has the American university gained the whole world but lost its soul? In terms of money, prestige, power, and freedom, American universities appear to have gained the academic world. But at what cost? We live in the age of the fragmented multiversity that has no unifying soul or mission. The multiversity in a post-Christian culture is characterized instead by curricular division, the professionalization of the disciplines, the expansion of administration, the loss of community, and the idolization of athletics. The situation is not hopeless. According to Perry L. Glanzer, Nathan F. Alleman, and Todd C. Ream, Christian universities can recover their soul—but to do so will require reimagining excellence in a time of exile, placing the liberating arts before the liberal arts, and focusing on the worship, love, and knowledge of God as central to the university. Restoring the Soul of the University is a pioneering work that charts the history of the university and casts an inspiring vision for the future of higher education.

▼▲
Perry L. Glanzer (PhD, University of Southern California) is professor of educational foundations at Baylor University and a resident scholar with Baylor Institute for Studies of Religion. He is the author, coauthor, or editor of several books including , , , , and . His primary scholarly and teaching interests pertain to moral education and the relationship between Christianity and education. Nathan F. Alleman (PhD, The College of William and Mary) is associate professor of higher education studies at Baylor University in Waco, Texas. Alleman studies and teaches about marginal and marginalized groups and institutions in higher education. His research includes sociological studies of faculty sub-groups (non-tenure track, faculty denied tenure, and religious outsiders) and the collegiate identities and experiences of student sub-groups (rural, first generation, undocumented, community college, religious minority, and food insecure). Alleman also writes about Christian higher education and the history of the YMCA student association movement. Todd C. Ream (PhD, The Pennsylvania State University) is professor of higher education at Taylor University, distinguished fellow with Excelsia College (New South Wales), and director of the Explorations in Small College Athletics (NCAA DIII) research initiative. In addition to authoring and editing a number of books on higher education, he has served on college and university campuses in residence life, student support services, and as a chief student development officer.

"This work calls all of us to recover a commitment to the 'higher' work in higher education. Reviewing the rich tapestry of university life over the centuries, the authors remind us of the ways that colleges and universities have contributed to human flourishing in big and small ways while also suggesting a hopeful way forward. This is a joy to read!"

"All universities search for a soul, for some unifying vision of identity and mission. So say the authors of this remarkable book, and they comb through the history of universities in the West to show what kinds of souls they have—whether a heart for God's way and will in the world, for unifying and building a national culture, or for creating more personal wealth and prowess. And they show what a fragmented sprawl of competing visions and ambitions contemporary American universities have become. Can their souls be saved? Only if, the authors insist, they recover a pervasively theological vision, drawing on the only reality that can comprehend all that there is: God. Then they suggest ways in which theology might reintegrate university life. What a grand, sweeping book. I have been trying for forty years to learn how to be a Christian higher educator and to make higher education Christian, and this book humbles me with its breadth of knowledge and depth of wisdom. It should be required reading for this field, especially for those called to lead in it."

"Restoring the Soul of the University makes it clear that the Christian failure to sustain universities in service to God was the result of the failure of Christians to think through their most basic convictions. But this is not a negative book. It is an insightful and historically illuminating account of how the university became fragmented, institutionally and in the souls of those who teach and study in the university setting. An imaginative theological proposal is developed that is a practical and hopeful alternative for restoring the soul of the university."

"The travails of the contemporary university have been dissected and diagnosed by scholars and pundits alike. The authors of this provocative volume locate our current crisis in a sense of fragmentation that is endemic to modern universities, a flaw that secular universities are not equipped to remedy. Glanzer, Alleman, and Ream argue that a unified, coherent vision for higher education is possible only when that vision is based in the triune God and God's story of redemption. Their book provides a prophetic critique of secular education and an attractive—albeit challenging—vision to Christian educators of what a learning community can be when truly centered in the triune God."

▼▲
I'm the author/artist and I want to review Restoring the Soul of the University: Unifying Christian Higher Education in a Fragmented Age.
Back
×
Back
×