Skip to main content
THE MEGA CHRISTMAS SALE: Save up to 85% off through 10/19 >
Restoring All Things: God's Audacious Plan to Change the World Through Everyday People
By: Warren Cole Smith, John Stonestreet
Stock No: WW1000300 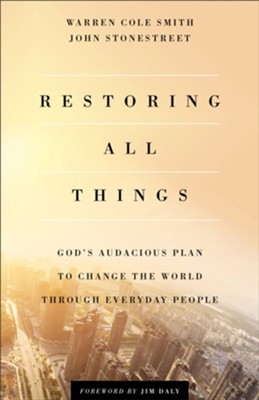 Restoring All Things: God's Audacious Plan to Change the World Through Everyday People

▼▲
Despite what the headlines may say, God is in control and at work in our world. In Restoring All Things, Warren Cole Smith and John Stonestreet shares inspiring real-life stories of justice, mercy, love, and forgiveness to show you how God is powerfully active. Encounter a God who is intimately involved in His creation and using His church to work out the redemption of this world. Paperback.

▼▲
It's easy to get discouraged by the headlines. It can often feel as if God has left the building, like we are on our own. We want to believe God's promises to us, and we search for signs of his continuing restoration of the world in which we live. Now, with passion and heart, two leading experts on Christianity and culture cut through the chaos and uncertainty to show readers how God is powerfully active and intensely engaged in fulfilling his promise to restore all things unto himself. Through inspiring real-life stories of justice, mercy, love, and forgiveness in our midst, Smith and Stonestreet present a God who is intimately involved in his creation and using his church to work out the redemption of this world.

▼▲
Warren Cole Smith is the vice president of WORLD News Group, publisher of WORLD magazine, and producer of the nationally syndicated radio programs The World and Everything in It and Listening In, a weekly interview program he also hosts. He has written, cowritten, or edited more than ten books, including A Lover's Quarrel with the Evangelical Church and Prodigal Press: Confronting the Anti-Christian Bias of the American News Media. He lives in Charlotte,
North Carolina.


John Stonestreet
is a speaker and fellow with the Chuck Colson Center for Christian Worldview, and a sought-after communicator and thought leader on faith and culture, theology, worldview, education, and apologetics. He is the voice of two nationally syndicated radio commentaries: BreakPoint (with Eric Metaxas) and The Point. John is the coauthor of Making Sense of Your World: A Biblical Worldview and Same-Sex Marriage: A Thoughtful Approach to God's Design for Marriage. He and his wife and three daughters live in Colorado Springs, Colorado.

▼▲
I'm the author/artist and I want to review Restoring All Things: God's Audacious Plan to Change the World Through Everyday People.
Back
Back