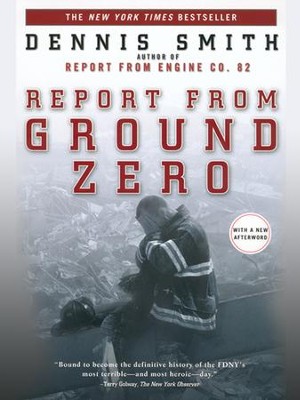 ▼▲
The tragic events of September 11, 2001, forever altered the American landscape, both figuratively and literally. Immediately after the jets struck the twin towers of the World Trade Center, Dennis Smith, a former firefighter, reported to Manhattan’s Ladder Co. 16 to volunteer in the rescue efforts. In the weeks that followed, Smith was present on the front lines, attending to the wounded, sifting through the wreckage, and mourning with New York’s devastated fire and police departments.

This is Smith’s vivid account of the rescue efforts by the fire and police departments and emergency medical teams as they rushed to face a disaster that would claim thousands of lives. Smith takes readers inside the minds and lives of the rescuers at Ground Zero as he shares stories about these heroic individuals and the effect their loss had on their families and their companies. “It is,” says Smith, “the real and living history of the worst day in America since Pearl Harbor.” Written with drama and urgency, Report from Ground Zero honors the men and women who—in America’s darkest hours—redefined our understanding of courage.

▼▲
Dennis Smith, a former New York City firefighter, is the founding editor of Firehouse Magazine and the bestselling author of eleven books, including Report from Ground Zero, Report from Engine Co. 82, and A Song for Mary. He is currently chairman of First Responders Financial Company.

"Mr. Smith has captured the horror and chaos of those first terrifying hours, and the ensuing anger and grief and determination. He has also captured the courage of New York city's firefighters and the spirit of the city's firehouses, bloody but unbowed in the wake of that terrible September morning." —Michiko Kakutani, New York Times

"To say the book is moving is an understatement." —Amazon.com

▼▲
I'm the author/artist and I want to review Report from Ground Zero - eBook.
Back
×
Back
×