Skip to main content
THE MEGA CHRISTMAS SALE: Save up to 85% off through 10/19 >
Renovation of the Heart: Putting On the Character of Christ
By: Dallas Willard
Stock No: WW32968 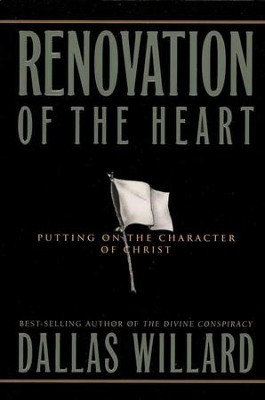 Renovation of the Heart: Putting On the Character of Christ

▼▲
We aren't born to stay the way we are. But how many times have we looked around us in dismay at the lack of spiritual maturity in fellow believers? It is evident in the rising rate of divorces among Christian couples. We find it in the high percentages of Christians, even pastors, who regularly view pornography. And we face it each time a well-known leader in the Christian community is found in sexual sin or handling finances dishonestly. Perhaps you have struggled with your own character issues for years, even decades, to little avail. There is good news. In Renovation of the Heart best-selling author Dallas Willard calls it "the transformation of the spirit" - a divine process that "brings every element in our being, working from inside out, into harmony with the will of God or the kingdom of God." In the transformation of our spirits, we become apprentices of Jesus Christ.

▼▲
Renovation of the Heart, a bestseller by Dallas Willard, explains the common misunderstandings about human nature and the discipleship process by outlining the general pattern of personal spiritual transformation—not as a formula, but as a systematic process. As intentional apprentices of Jesus, we are to move deeper into a relationship with God while becoming more like Jesus. In his unique, winning way, Willard guides you in discovering your true identity while exploring spiritual growth in a new way. Includes discussion questions.

▼▲
Willard (The Divine Conspiracy), a professor of philosophy at the University of Southern California who is also a Southern Baptist minister, here tackles the central Christian question of how to be more like Christ. He claims that the church's failures throughout history are a result of Christians' reading biblical passages that adjure them to Christ-like perfection and then trying to reach that perfection by behaving more perfectly. Instead, he argues that believers should allow God to transform them internally so that their actions, though never quite perfect, will at least be more aligned with God. Willard delineates six areas of such transformation thought, feeling, will, body, social context and soul and delineates a general process toward transforming each. The book's chapters are divided into very short subsections, which, especially in the first four chapters, are inchoate as Willard struggles to explain exactly what the "heart" is and why it is important. Though trained as a philosopher, he does not explicate philosophical discussions over, for example, human nature, settling instead for saying that "we cannot deal with [them] here." Such a position contributes to the book's early incoherence and to a consistent lack of support, and, therefore, power. However, many evangelicals will appreciate his fresh and less guilt-ridden approach to Christian spiritual growth. The book is heavily Bible-based, provides discussion questions and includes a chapter on spiritually transforming congregations as well as individuals. (May) Copyright 2002 Cahners Business Information.

▼▲
I'm the author/artist and I want to review Renovation of the Heart: Putting On the Character of Christ.
Back
Back