Skip to main content
CYBER WEEK SALE! Spot great deals up to 88% off. >
The Religions Next Door: How Journalist Misreport Religion and What They Should Be Telling Us. - eBook
By: Marvin Olasky
Stock No: WW16846EB 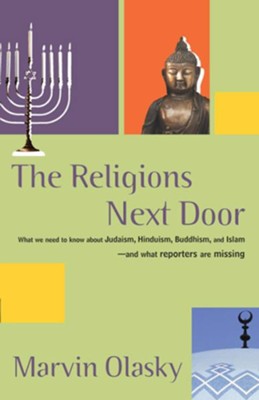 The Religions Next Door: How Journalist Misreport Religion and What They Should Be Telling Us. - eBook

▼▲
The Religions Next Door: What we need to know about Judaism, Hinduism, Buddhism, and Islam - and what reporters are missing will educate readers as to the truth about world religions that the media often misrepresent. Our neighborhoods are full of religious diversity these days, but the media would have us believe they all hold different variations of the same tenets. But this isn’t so, and it is in those missed details that serious and grave misjustice is done to the American people by the misreporting of religion.The Religions Next Door provides insight into the beliefs of four growing religions in America, and challenges the media community to report religion as real news - not as community relations fodder, but as stories of human and theological interest.

is professor of journalism at the University of Texas at Austin and editor-in-chief of World, AmericaÕs fourth most-read newsweekly. He is also a syndicated columnist and a senior fellow of the Wilberforce Forum and the Acton Institute for the Study of Religion and Liberty. His articles have appeared in The New York Times, Wall Street Journal, USA Today, Washington Post, Fortune, National Review, and many other leading publications. Olasky is the author of fourteen books, including The Religions Next Door and Monkey Business, and a graduate of Yale University (B.A.) and the University of Michigan (M.A., Ph.D.).

▼▲
While a huge majority of Americans still claim at least some connection to Christianity, four other faiths are rapidly gaining ground. Judaism has been here since the founding, but today Islam, Hinduism, and Buddhism are also making inroads into American culture. Unlike their reporting on Christianity, however, a largely uncritical press generally portrays these four religions positively.
Marvin Olaskys new book, The Religions Next Door, offers a more in-depth look at the guiding tenets of theologically conservative branches of these four religions than readers are likely to get from the mainstream press  a press untutored, for the most part, in religious thought. A journalism professor at the University of Texas-Austin and editor of World magazine, Olasky was born into a Jewish household, turned to atheism in his teens, then became a Christian in his twenties. Such a background gives Olasky a unique perspective on the issues addressed in this book. In addition, Olasky did research in India, Cambodia, and Japan to increase his understanding of Hinduism and Buddhism.
The Religions Next Door is divided into ten chapters with two chapters assigned to each religion. The first of the two chapters describes the religions general beliefs and practices. Alternating chapters explore how those beliefs and practices intersect with and influence politics, culture, and the behavior of the faithful. Chapter two, for instance, focuses on the historical emphasis so important to Judaism while chapter four looks at the caste system that is such an integral aspect of Hinduism.
Through a series of examples drawn from a Lexis-Nexis search, the books final two chapters chronicle the medias failure to do the hard work necessary to understand and report honestly on these religions. As the subtitle suggests, Olasky believes the press consistently misses the real story and provides the public with a skewed picture of what these religions are all about. Despite the events of September 11, for example, the press often depicts Islam as a religion of peace and the terrorists as merely an aberration while the reality is far more complex and disquieting.
During the past two centuries, Karl Marx called religion the opium of the people, Charles Darwins theory of evolution seemed to eliminate any need for God, and Friedrich Nietzsche declared God dead. Religion, nonetheless, remains a significant motivating factor in peoples lives. In many cases, understanding our neighbors means understanding their religion and its potential both for harm and for good. In The Religions Next Door, Marvin Olasky has delivered an accessible primer on four of the worlds most important religions as well as a trenchant critique of how those religions are currently portrayed in the press. I encourage everyone to set aside time to read it.  Linda Whitlock, Christian Book Previews.com

▼▲
I'm the author/artist and I want to review The Religions Next Door: How Journalist Misreport Religion and What They Should Be Telling Us. - eBook.
Back
Back