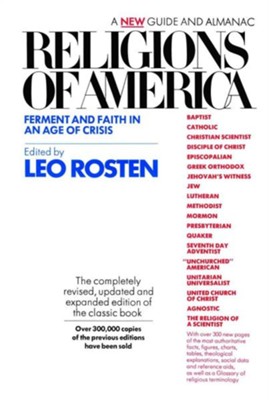 Religions of America: Ferment and Faith in an Age of Christianity

▼▲
(PUBSimon & Schuster)Revised and expanded edition of this authoritative reference. It includes the most complete figures, tables, charts, articles, and research available---in one volume. The main body is formatted into a series of short questions with easy-to-follow paragraph replies. 672 pages, softcover.

▼▲
This fascinating new book reflects the results of the turmoil and change in the religions of America since Leo Rosten first wrote about them.
The first section consists of nineteen articles by distinguished men, each one a recognized authority on the creed for which he speaks, setting forth the clear and candid stories of our own faiths and those of our neighbors. All religions are covered, from the major established groups to the "charismatic" cults. There are also chapters about the agnostic, the non-churchgoer and what he believes, and the scientist. A multitude of questions are raised and answered, such as: What percent of ministers profess they no longer believe in God? In which leading church can homosexuals be married? How many priests condone birth control devices? Abortions? Which faiths feel what way about intermarriage? Divorce? Have churches that participated in social activism in the 1960s gained or lost in their membership and their finances? Have the Protestant and Roman Catholic churches significantly changed their 400-year-old schism?
Part Two is the Almanac, a massive compendium that is more complete and far-ranging than any other existing one, with the statistics, public opinion polls, basic documents, sociological résumés and psychological analyses of the role, conflicts, influences and trends that characterize religion in the United States today. These basic authoritative facts and figures are accompanied by the author's own essays and comments on material that is rarely subjected to critical examination. There is also a Glossary of religious terminology.
Those familiar with Leo Rosten's A Guide to the Religions of America (1955) and his Religions in America (1963) need not be told of the extraordinary reception both volumes received from the reviewers and the public. They were acclaimed by theologians of all faiths. Each book sold hundreds of thousands of copies. But this new Religions of America renders those two volumes entirely out of date. There is no other book even remotely comparable to it.

▼▲
I'm the author/artist and I want to review Religions of America: Ferment and Faith in an Age of Christianity.
Back