EARLY CHRISTMAS SALE: Shop over 900 items up to 85% off through 9/29 >
The Rise of Liberal Religion: Book Culture and American Spirituality in the Twentieth Century
By: Matthew Hedstrom 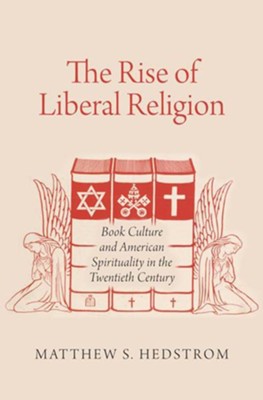 The Rise of Liberal Religion: Book Culture and American Spirituality in the Twentieth Century

▼▲
Winner of the Frank S. and Elizabeth D. Brewer Best First Book Prize of the American Society of Church History

The story of liberal religion in the twentieth century, Matthew S. Hedstrom contends, is a story of cultural ascendency. This may come as a surprise-most scholarship in American religious history, after all, equates the numerical decline of the Protestant mainline with the failure of religious liberalism. Yet a look beyond the pews, into the wider culture, reveals a more complex and fascinating story, one Hedstrom tells in The Rise of Liberal Religion.

Hedstrom attends especially to the critically important yet little-studied arena of religious book culture-particularly the religious middlebrow of mid-century-as the site where religious liberalism was most effectively popularized. By looking at book weeks, book clubs, public libraries, new publishing enterprises, key authors and bestsellers, wartime reading programs, and fan mail, among other sources, Hedstrom is able to provide a rich, on-the-ground account of the men, women, and organizations that drove religious liberalism's cultural rise in the 1920s, 1930s, and 1940s. Critically, by the post-WWII period the religious middlebrow had expanded beyond its Protestant roots, using mystical and psychological spirituality as a platform for interreligious exchange. This compelling history of religion and book culture not only shows how reading and book buying were critical twentieth-century religious practices, but also provides a model for thinking about the relationship of religion to consumer culture more broadly. In this way, The Rise of Liberal Religion offers both innovative cultural history and new ways of seeing the imprint of liberal religion in our own times.

▼▲
Matthew S. Hedstrom is Assistant Professor of American Studies and Religious Studies at the University of Virginia.

▼▲
"Lively Hedstrom's work is a welcome contribution to a new generation of scholarship on liberal religion in America."--Books & Culture
"This is a useful contribution to the study of American religion in the twentieth century."--Theology
"Hedstrom makes historians view liberal religion beyond institutional criteria of church or denominational growth and decline . a thoroughly researched and engaging monograph."--Church History
I came away from Hedstrom s book with a rich understanding of the culture of midcentury liberal religion.... Hedstrom has set an exciting agenda for future scholars."--The Journal of Religion
"Outstanding... extraordinarily interesting."--Journal of the American Academy of Religion
"Thoughtful and erudite."--Christian Century
"This description of the marriage of liberal religion and publishing in the US in the 20th century fuses a deep familiarity with historical archives, sensitivity to the movement of American religious practices, and insightful interpretations of texts and images...Recommended."--CHOICE
"Belongs on the to-read list."--Richmond Times-Dispatch
"Hedstrom's terrific study suggests that there is much more to the story of religious liberalism in twentieth and twenty-first-century America than the numerical decline of mainline Protestant churches."--American Historical Review
"Perceptive and compelling. Hedstrom offers a creative spin on a familiar story."--The Journal of American History
"An original and eye-opening study, planting liberal religion in the wider history of liberalism, including its middlebrow culture of print. Hedstrom shows how liberal religion keeps renewing itself by sidling up to secular culture, and by welcoming wave after wave of refugees from orthodoxy on the one hand and agnosticism on the other, all of them drawn to the premise of liberal spirituality that science and religion make excellent bedfellows."--Richard Fox, Professor of History, University of Southern California
"Smart, innovative, and fascinating... Hedstrom tells a compelling story. He masterfully blends important theoretical insights with an engaging narrative... This is an excellent, well-written, and transformative study that scholars will be wrestling with for years to come." --Register of the Kentucky Historical Society

"Hedstrom's work is highly recommended to students of American religions, those interested in the history of the book, twentieth-century historians, and scholars of spirituality."--Textual Cultures
"Hedstrom shows that the prevailing values of liberal Protestantism were widely disseminated through mass-market, 'middlebrow' books during the middle decades of the twentieth century, influencing ostensibly secular domains of popular culture in ways that no previous scholar has established. This is a strikingly original, crisply argued contribution to cultural and religious history."--David A. Hollinger, Preston Hotchkis Professor of History, University of California, Berkeley
"Hedstrom dexterously knots together several cultural threads: liberal Protestantism, middlebrow reading habits, corporate publishing, popular psychology, and seeker spirituality. The expectation that the right religious books-mystical, adventuresome, psychologically attuned, and affordable-would arrest modernity's dissolutions was perhaps another instance of liberal Protestantism's unrequited optimism, but Hedstrom makes a compelling case for just how potent this publishing mission was from the 1920s through the 1940s and beyond."--Leigh Eric Schmidt, Edward Mallinckrodt University Professor, Washington University in St. Louis
"In this engrossing study, Matthew Hedstrom provides nothing less than a series of revelations -- about the construction of liberal religion, the circulation of books, and indeed the making of modern spiritual selves. Hedstrom's work will reshape historians' understanding of religion in 20th-century America. For those who wish to push the historical analysis, this book will also invite new questions about liberal religion in 2013 and beyond."--Lauren F. Winner, Assistant Professor of Christian Spirituality, Duke Divinity School
"Hedstrom brilliantly describes some of the unforseen results of this new complicity between religion and consumer culture." --The Journal of Unitarian Universalist History
"In the modern age of mass-culture and commoditization, liberal religious intellectuals reasoned that the consumption of good books could make a far-reaching contribution to the spiritual formation of American readers. Matthew Hedstrom delivers a deeply thoughtful and thoroughly researched study that urges us to recognize how liberal religion used mass-culture rather than just sneered at it, and to think hard about reading and spirituality today. The legacy of liberal religion is larger than we might have thought."--David Morgan, Professor of Religion, Duke University

▼▲
I'm the author/artist and I want to review The Rise of Liberal Religion: Book Culture and American Spirituality in the Twentieth Century.
Back
×