Shipment delay - click here for more details
Gods of Our Religion: Christianity in America: An Inside Conversation - eBook
By: Lawrence Crawford 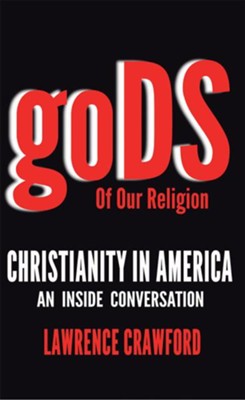 Gods of Our Religion: Christianity in America: An Inside Conversation - eBook

Gods of Our Religion is a very deliberate conversation offering a for real look at the gods within Americas Christian churches. Culture in America is evolving into a self-centered consumer mentality. It should be no surprise that the Christian churches in America, in an attempt to survive, are moving in the same direction.

Whether you consider yourself a Christian, atheist, agnostic, Jew, Muslim, or other religious designations, Gods of Our Religion seeks to whet your appetite to know more about the inside of Christianity in America. Humanistic culture and internal competition are redefining Americas Christian church world.

Everyone believes something. If you believe in nothing, this nothing is the something in which you believe. Either way, something or nothing, one has to press into their belief system in order to overcome the contrasting winds blowing in both directions.

Americas Christian churches clearly illustrate the confusion that can occur when the cultural winds create a mixture of belief systems that supposedly have the same origin. But do they?


Gods of Our Religion is a hard-hitting and very opinionated conversation. Though there may be proclamations of progressiveness by church leaders, attention to detail internally reveals the humanistic influence that has in many ways altered what was once a true and genuine spiritual experience. Many of the gimmicks, sermons, and methods used to promote life within the ABC Church lend themselves to creating religious waves dressed in attractive and colorful clothes, but with a growing spiritual deficit.

There is no doubt external forces are at work against Christianity in America. But, there is a bigger internal conflict that is even more threatening.

▼▲
I'm the author/artist and I want to review Gods of Our Religion: Christianity in America: An Inside Conversation - eBook.
Back
×
Back
×