BRING CHRISTMAS HOME SALE: Save up to 85% through 11/2 >
Relentless Redemption: For Everyone Who Has Ever Felt Discarded or Disqualified...One Woman's Inspiring Story From Devastation to Destiny! - eBook
By: Laura Lynn Tyler-Thompson 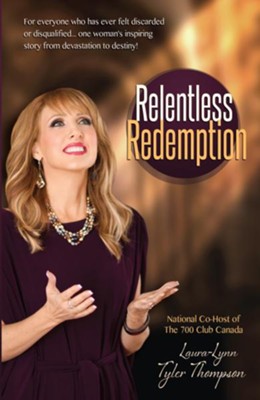 Relentless Redemption: For Everyone Who Has Ever Felt Discarded or Disqualified...One Woman's Inspiring Story From Devastation to Destiny! - eBook

For the shattered, He brings healing. For the disqualified, He qualifies. And for the weak, He becomes your stength. God pursues you down the darkest corridors and beckons you with His relentless love, redeeming you from every disaster that was orchestrated against you. Outrageous days that stagger and confound the mind, lay just beyond the most brutal of seasons."

Inspirational & comedic speaker, Laura-Lynn Tyler Thompson, is the co-host for the national daily show, The 700 Club Canada. Called by God to the media miraculously one night in 1999, she has interviewed hundreds of celebrities and many great men and women of faith like Josh McDowell, Pat Robertson, Tony Campollo, Dr. Gary Champman, Bill Hybels, Patsy Clairmont, and Thelma Wells.

Over 90 of her celebrity interviews have aired on The BIOGRAPHY Channel Canada. She's interviewed Hollywood favorites Josh Duhmel and Jesse Metcalfe, Dog the Bounty Hunter, Stedman Graham and Henry Winkler to name a few. She has hosted numerous television programs over the years as well as produced and starred in her own comedy sketch show Coffee Shop Girl.

However, the real story of where she came from and the brokenness she experienced as a young woman, has never been told. Devastation so severe, she lived for years believing she would never recover and had permanently disqualified herself from her destiny.

God's relentless pursuit of her is meticulously recorded on the pages of this book. Her story will inspire and ignite you to realize no matter how tragic your journey has been, it's never too late! God has called you to a great work and the secrets to rising out of the ashes are contained in detail. Her comedic style of writing will also cause you to laugh out loud at God's vindication and outrageous Relentless Redemption.

Born to missionary parents in Kampala, Uganda, Laura-Lynn grew up knowing she wanted to make a difference for God. She decided very early on that she would serve Jesus for the rest of her life. After eight years in Uganda, in 1973, her father witnessed an army general murder their town mayor, one block from their home. Things had gone bad in the pearl of Africa.

Shortly thereafter, President Idi Amin Dada, the military dictator of Uganda at the time, deported her family. He eventually murdered about 500,000 of his own people. After this traumatic experience in losing the place she called home, Laura-Lynn moved with her family to Tuktoyaktuk in the Northwest Territories, where she lived for three years. "It was like going from the oven to the freezer.

Home then became Vancouver, BC and a series of personal crisis and brokenness brought her to her knees. She felt disqualified from the destiny she had felt was birthed inside her as a child. In God's loving and merciful way, He showed her that her identity had never been dependent on her performance, but rather on the righteousness of Jesus, Who had paid a high price to set her free. This revelation broke off a 3 year depression and she began to heal inside.

In 1999, God powerfully and supernaturally called her to television late one night as she was folding laundry. Still feeling unworthy and somewhat perplexed by this direction, she began an adventure that has become the ride of her life! Laura-Lynn has an often hilarious recounting of events, which led to her national television career. As she found out, the road to success is often paved with complete ineptness. Laura-Lynn did not let her quirky, eccentric, unconventional personality set her back. Instead she embraced all that God had created her to be and turned it into a talk show!

Her experiences have ranged from outrageous and exhilarating to heart breaking and life altering. Laura-Lynn brings her light-hearted yet profound, straight-to-the-point insight to her audience. In a dynamic and candid way she refuses to offer anything less than honest, gut-level truth. Having hit her own rock bottom, she is able to convey with certainty that there is hope beyond despair and life after seeming death.

Today, Laura-Lynn resides in Vancouver with her husband, their three children, a cat named Tiki and their mischievous dog, Tallula. Laura-Lynn also loves her extended family, high-risk youth, who come and live with them in their home. There is no greater joy than pouring out one s life to those who can never repay you. I am excited to see what God-sized adventures lay beyond my own mind s limitations. I press on towards the call to do my part to finish the course that destiny has laid before me. Laura-Lynn has discovered personally the truths she now fervently shares with her hearers. With a quick wit and fast paced humor, she is a delight to both youth and adult audiences. Laura-Lynn, a charismatic personality, comedic speaker and television host.

▼▲
I'm the author/artist and I want to review Relentless Redemption: For Everyone Who Has Ever Felt Discarded or Disqualified...One Woman's Inspiring Story From Devastation to Destiny! - eBook.
Back
×
Back
×