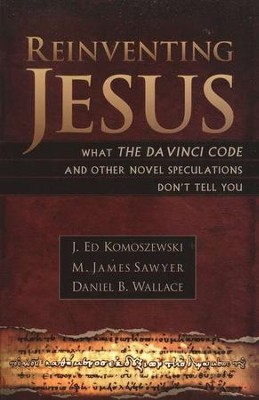 ▼▲
Cultural misconceptions abound regarding the uniqueness of Christ and the reliability of the New Testament. International bestsellers such as The Da Vinci Code and Misquoting Jesus merely add fuel to the fire. In this meticulously researched guide, Komoszewski, Sawyer, and Wallace invite readers to take a firsthand look at the primary evidence for Christianity's origins.

▼▲
From the worldwide phenomenon of "The Da Vinci Code" to the national best-seller "Misquoting Jesus," popular culture is being bombarded with radical skepticism about the uniqueness of Christ and the reliability of the New Testament. "Reinventing Jesus" cuts through the rhetoric of extreme doubt expressed by these and several other contemporary voices to reveal the profound credibility of historic Christianity. Meticulously researched, thoroughly documented, yet eminently readable, this book invites a wide audience to take a firsthand look at the solid, reasonable, and clearly defensible evidence for Christianity's origins. "Reinventing Jesus" shows believers that it's okay to think hard about Christianity, and shows hard thinkers that it's okay to believe.

▼▲
Recently, there has been a flood of attention given to the life of Jesus. One film in particular that has contributed to this is The Da Vinci Code, based on the novel of the same name by author Dan Brown. (He has also written Angels & Demons, Deception Point, and Digital Fortress.) The plot outline is that a murder inside the Louvre leads to the discovery of clues found in the Da Vinci paintings, such as the Mona Lisa, which uncover information that has been protected by a secret society for 2,000 years. This information is so powerful that if brought out into the open, it could have major repercussions on Christianity. What this movie is really attempting to do, however, is to tear down the credibility of the historic Christian faith. This is not new by any means. Liberal theologians, philosophers, atheists, and various unbiblical religious leaders have attempted to do the same for a long time. The Da Vinci Code is just a more popular, though no less dangerous, attempt to rewrite history.
One book in particular that has taken on Dan Brown's historical reconstruction is Reinventing Jesus: What The Da Vinci Code and Other Novel Speculations Don't Tell You, co-authored by J. Ed Komoszewski, M. James Sawyer, and Daniel B. Wallace. Reinventing Jesus is divided up into five parts: Part 1, which deals with the history behind the New Testament manuscripts; Part 2, which answers critical questions about the ancient manuscripts behind the New Testament; Part 3, which answers questions about how the Canon was determined; Part 4, which answers questions about Jesus, His divinity, and what the early church thought of Him; and Part 5, which answers the question if Christianity used ideas from mythic gods and applied them to Jesus.
With all the hype around The Da Vinci Code, the authors of Reinventing Jesus make this accurate statement: "Although The Da Vinci Code is a fascinating tale, that is all it is: a tale, a fable, a good yard spun by a master storyteller" (p. 193). Adding later in the book, they write, "So why all the present fuss about the historical Jesus? More specifically, why are so many people infatuated with reinterpretations of his life? Little attention is given to the scriptural portrait of Christ. However, when a new perspective on Him---one that is decidedly out of sync with the Bible---is unveiled, it draws a crowd. But why isn't society interested in reinventions of other major religious figures? Why not Muhammad, Buddha, Moses, or Confucius? Why Jesus? In a word: accountability. People in the civilized, Western world usually know something about Jesus and the gospel message, and their interest in him rises whenever a new theory comes along that can ease their consciences. People gravitate toward a tame Jesus; a Jesus who can be controlled, a Jesus who is not threatening, a Jesus who values what they value and does not demand anything of them at all. In other words, a Jesus who is not Lord and Savior. Frankly, it's hard to escape the feeling that our culture has taken Jesus' question 'Who do you say that I am?' and changed it to 'Who do you want me to be?' But the real Jesus doesn't ask that question; the real Jesus is not so tame" (pp. 261-62).
While there are other books being written to defend the historical Jesus of the New Testament, and the authenticity and trustworthiness of the New Testament writings, Reinventing Jesus is one of the better ones read by this reviewer. The authors cover such a breadth of material that it is hard to find one of similar value in terms of thoroughness and argumentation. I highly recommend this work.  Ray Hammond, Christian Book Previews.com

▼▲
I'm the author/artist and I want to review Reinventing Jesus: How Contemporary Skeptics Miss the Real Jesus and Mislead Popular Culture.
Back
Back