Skip to main content
BRING CHRISTMAS HOME SALE: Save up to 85% through 11/2 >
Reforming Fundamentalism: Fuller Seminary and the New Evangelicalism
By: George M. Marsden
Stock No: WW808707 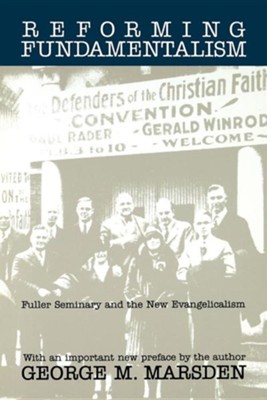 "The best telling of the story of the past," writes George Marsden, "relies on a balance of the general and the particular." In this book, a sequel and companion to his widely acclaimed Fundamentalism and American Culture (Oxford, 1980), Marsden uses the history of Fuller Theological Seminary — a durable evangelical institution — as a lens through which to focus an examination of the broader story of evangelicalism and fundamentalism since the 1940s.

Marsden's detailed history relies heavily on primary sources: personal recollections and correspondence of the seminary's founders, and discussions with students and staff from throughout the seminary's history. Although the story of Fuller Seminary provides the framework for this fascinating look at a segment of American religious history, Marsden's careful and knowledgeable attention to the surrounding worlds of mainline denominations and stricter fundamentalism makes this book a major contribution to the study of a movement that has played an important role in shaping American culture.

▼▲
George M. Marsden is also Francis A. McAnaney Profess Emeritus of History at the University of Notre Dame. Among his many books is Jonathan Edwards: A Life, named one of ten "Books of the Year" for 2003 by Atlantic Monthly and winner of the prestigious Bancroft Prize in history (2004) and the Grawemeyer Award in religion (2005).

▼▲
I'm the author/artist and I want to review Reforming Fundamentalism: Fuller Seminary and the New Evangelicalism.
Back