Did the Reformers Misread Paul?: A Historical-Theological Critique of the New Perspective - eBook
By: Aaron O'Kelley 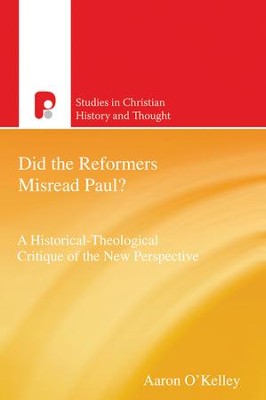 Did the Reformers Misread Paul?: A Historical-Theological Critique of the New Perspective - eBook

By: Aaron O'Kelley
More in Studies in Christian History and Thought Series
Paternoster / 2014 / ePub
Write a Review
In Stock
Stock No: WW69427EB

▼▲
In this study, Aaron O'Kelley argues that the 'new perspective' on Paul rests on a faulty hermeneutical presupposition, namely, that covenantal nomism could not have served as a foil for Paul in the development of a doctrine of justification that resembles that of the Reformation.
COMMENDATIONS
"Carefully researched and argued, Aaron O'Kelley's monograph offers a refreshing engagement of New Testament scholarship from the perspective of historical and systematic theology."
- Kevin W. McFadden, Cairn University, USA

▼▲
Aaron O'Kelley grew up in northeast Texas and attended East Texas Baptist University. While there, he married his wife, Joni, in 2001. He graduated with a Bachelor of Arts in Religion in 2002 and then moved to Louisville, Kentucky, where he earned a Master of Divinity degree in 2006 and a Doctor of Philosophy in Systematic Theology in 2010. He served as pastor of Corn Creek Baptist Church in Milton, Kentucky, from 2003-2009 before moving to Jackson. He currently serves as Pastor at Cornerstone Community Church.
Aaron and Joni have two children, Benjamin and Ethan.

▼▲
I'm the author/artist and I want to review Did the Reformers Misread Paul?: A Historical-Theological Critique of the New Perspective - eBook.
Back
×
Back
×