Reformation ABCs: The People, Places, and Things of the Reformation--From A to Z
By: Stephen J. Nichols
Illustrated By: Ned Bustard 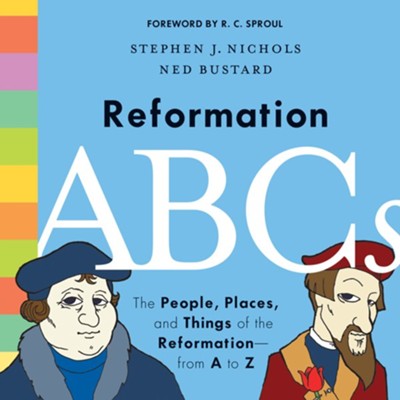 Reformation ABCs: The People, Places, and Things of the Reformation--From A to Z

▼▲
What do Martin Luther, Huldrych Zwingli, John Calvin, and John Knox have in common? They were all leaders of the Protestant Reformation! Offering kid-friendly insights into this critical hinge of history, exciting narrative and whimsical illustrations explore key events, ideas, and people as children parade through the 26 letters of the alphabet.

Featuring easy-to-understand storytelling and whimsical illustrations, this accessible and informative book offers kids a fun way to learn about key events, ideas, and people from the Reformation. Written for kids ages three to six, but engaging enough for the whole family.

Stephen J. Nichols (PhD, Westminster Theological Seminary) serves as the president of Reformation Bible College and chief academic officer of Ligonier Ministries. He is an editor of the Theologians on the Christian Life series and also hosts the weekly podcast 5 Minutes in Church History.

Ned Bustard (BA, Millersville University) is a graphic designer, author, illustrator, art gallery director, and printmaker. He owns the design firm World's End Images, and is also the creative director for Square Halo Books, Inc. He is the designer for Christians in the Visual Arts. Ned and his wife, Leslie, have three daughters.

▼▲
I'm the author/artist and I want to review Reformation ABCs: The People, Places, and Things of the Reformation--From A to Z.
Back
×
Back
×