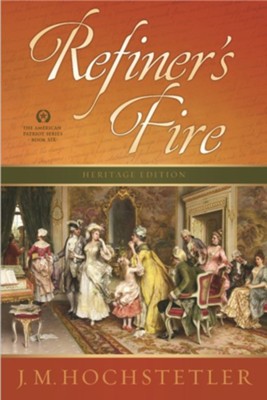 Will the Refiner's Fire finally separate them forever, or can they find their way back to each other's arms?

While the Continental Army endures a desperate winter at Valley Forge, le comte de Caledonne secretly sweeps Elizabeth away to France out of reach of British assassins. Meanwhile General Jonathan Carleton, the Shawnee war chief White Eagle, returns to his people as General George Washington's emissary, doubting that he will ever return to the white world. But as the war between America and Britain shifts into the fragile republic's heartland at Monmouth Court House, sinister schemes draw Jonathan and Elizabeth into their own separate maelstroms. Can they survive the refining fire of war to find each other again?

From the flames of war exploding across land and sea to the dangerous intrigues of the French court and the Shawnee's bitter resistance to the Long Knives, Refiner's Fire continues the breathtaking saga of America's founding in a gripping story of heartbreak, redemption, and the unyielding constancy of love.

▼▲
With Americas' fierce fight for independence hanging in the balance, Elizabeth Howard and Jonathan Carleton are driven thousands of miles and a vast ocean apart. While the Continental Army endures a desperate winter at Valley Forge, French Admiral le comt

▼▲
I'm the author/artist and I want to review Refiner's Fire - eBook.
Back
Back