Reel to Real: 45 Movie Devotionals for Families
By: Ted Baehr 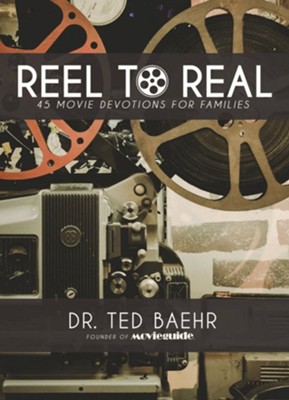 Movies can inspire your heart and transform your mind.

Christians want to be inspired and equipped by God's grace so they can have the abundant life Jesus promised in John 10:10. While most of the culture has drifted away from the good news, more and more Hollywood movies proclaim it in word and deed.

Some of the movies include It's a Wonderful Life, Smurfs: The Lost Village, Hacksaw Ridge, Sing, Les Miserables, Squanto: A Warrior's Tale, God's Not Dead 2, Amazing Grace, and Frozen.

Movies are a powerful medium to communicate truth. Reel to Real will help you discover God's heart in movie favorites as you enjoy the wonder of entertainment.

TED BAEHR is the founder and chairman of The Christian Film & Television CommissionTM and publisher of MOVIE GUIDE® (movieguide.org), a family guide to entertainment. An award-winning media authority on television, radio and print, his purpose is to be used by God to redeem the mass media and to encourage families to use wisdom in selecting their entertainment. He is the author of over thirty-five books, including How To Succeed In Hollywood (Without Losing Your Soul), The Media-Wise Family, Narnia Beckons, Faith In God & Generals, The Amazing Grace Of Freedom, and The Culture-Wise Family. Ted makes his home in Los Angeles, California.

▼▲
Dr. Ted Baehr has done a beautiful job inspiring us all in his new book, Reel to Real. I am so proud to have won some of his Movieguide® awards, and I’m honored to recommend his amazing new book.
- Dolly Parton, singer/songwriter, producer, actress, and philanthropist

After nearly two decades working in Hollywood, I’ve found that the secular space did not hinder my spirituality but enhanced it. I’ve learned valuable lessons from my industry and my dear friend, Dr. Ted Baehr, who has proven that even films can enrich our daily walk with God. Reel to Real: 45 Movie Devotions for Families is a groundbreaking book that references movies that inspire. Just like the many parables we turn to in times of emotional crisis, Dr. Ted Baehr has compiled films that reflect the Word of God, and this too deserves to be on your nightstand!
- DeVon Franklin, CEO/Franklin Entertainment


Reel to Real presents forty-five days of daily inspiration providing valuable spiritual and emotional insights to be found in movies. As a producer of film and television, I am grateful that these devotions help to bridge the gap between the mass media of entertainment and those who have a desire to know God better. Our friend Dr. Ted Baehr has done a wonderful job.
- Roma Downey, award-winning actress and producer

Dr. Ted Baehr has done a wonderful job weaving powerful, beloved movies as illustrations to give insights into the principles of God’s Word, to help our children grow in godly wisdom, discernment, and grace. What fun—families sharing great movies that children love to foster biblical values! Reel to Real is two thumbs up!
- Kevin Sorbo, award-winning actor, director, producer


Ted Baehr is one of America’s heroes! For decades he has stood for the best in the media world and positively influenced innumerable production houses, directors, producers, and talent. In his new book, he opens his heart and shares with you some of the secrets of Hollywood’s best movies in a very enriching manner. Don’t miss Reel to Real.
- Bruce Wilkinson, author of The Prayer of Jabez and president of Teach Every Nation

Reel to Real is a wonderful parents’ devotional guide for engaging memorable films to convey the importance of God’s Word. Jesus spoke in parables, and Ted speaks in movies! I commend to everyone Dr. Ted Baehr’s Reel to Real.
- Sam Sorbo, award-winning actress, writer, and producer

Thank you, Ted Baehr, for helping us see movies through a "redemptive" lens. As a talk show host and parent, I know this book will be a valuable resource. So, two thumbs up—and they both point to the Savior! What a breath of fresh air and a "front-row" look at Hollywood from a true insider, yet through the beautiful perspective of eternity. This book should be in the homes of every family concerned with reaching our culture with the gospel of Jesus Christ!
- Stu Epperson Jr., president of The Truth Network and author of First Words of Jesus

My dear friend Ted Baehr is like John the Baptist, "a voice crying in the wilderness"! I’ve lived and worked in that wilderness—the entertainment world—for over fifty years now, and it has become truly an environment of great accomplishment but lost purpose ... and lost souls. It is increasingly a wilderness" of immorality, greed, and secular idolatry. But, for many of those same years, Ted Baehr has been revealing the good and the bad, the positive and destructive, in movies and television, helping guide parents and their children through the glittering morass of a cinematic "Never, Never Land" that glamorizes decadence but can eat away the morals of the young. And, as he annually shows how family values entertainment has the best chance of profitability, his "Teddy Bear" awards are gratefully accepted by some of Hollywood’s most successful writers, directors, producers, and stars. He’s making a serious difference, and convincing many in the entertainment world that good can be more profitable and more award worthy than bad. And now comes this amazing book, the result of Ted’s long study of the best and worst in films and TV—and his simultaneous immersion in the eternal Word of God. As Jesus used parables—stories of contemporary life—to teach everlasting truths, Ted Baehr is using contemporary films to illustrate and underscore vital lessons and moral guidance for young viewers! Every point is Scripture-based and every lesson obvious and undeniable. What an incredible asset for today’s responsible parents! A personal example: When The Exorcist hit the screens, I took my young children to see it, hoping it would accurately depict real-life demonic activity in our day. And though it wasn’t totally scriptural in all details, it so impacted my four young daughters that we prayed together as never before, not just then but through years to come. It made us realize that we are living in a spiritual battlefield, a literal war for our souls, and that belonging to God is our only way to navigate through the "wilderness" of modern life. Thank God for Ted Baehr, our valiant "voice crying in the wilderness"!
- Pat Boone, singer, composer, actor, writer, motivational speaker, and spokesman

In a world where people are actually perishing for lack of knowledge, all is not lost. Ted Baehr provides truth, encouragement and faith with life-affirming agape love in Reel to Real: 45 Movie Devotions for Families. This anecdotal, power-packed devotional imparts a godly path to world transformation in media and entertainment. A must read!
- Evangelist Alveda King, civilrightsfortheunborn.com

It gives me great pleasure to congratulate my good friend, Ted Baehr, on his new book Reel to Real: 45 Movie Devotions for Families. Ted has taken the movies of our day—the new parables of our culture—and gleaned important spiritual, emotional, and physical insights that can improve our lives and the lives of our families. He has relied on his extensive experience in entertainment media and his great love of God’s Word to bridge the gap between the entertainment industry and the desire to know God and live for Him. I applaud Dr. Ted Baehr for the wonderful work he has done and am honored to recommend to you his newest success, Reel to Real.
- Dr. M. G. "Pat" Robertson, founder/chairman, The Christian Broadcasting Network, Inc.

Dr. Ted Baehr has supported me and my passion to bring roles to life throughout the years. I am so excited for his book Reel to Real: 45 Movie Devotions for Families to be brought to the hearts and homes of many! Movies and entertainment create and drive our culture, so showing powerful insights into the principles in God’s Word with movies as illustrations provide a bridge to help us grow in godly wisdom, discernment, and grace.
- Bailee Madison, star actress

Ted Baehr has used his years of experience in the world of film and entertainment to point us to the Word of God. Kudos for highlighting biblical life-lessons that can be gleaned from movies!
- Alex Kendrick, writer, producer, director, and actor

Make no mistake about it, movies often influence our culture greatly, often in unbiblical ways. Therefore, showing powerful insights into the principles in God’s Word, with entertaining movies as illustrations, provides a bridge to help us and our children grow to be culture-wise and to redeem the mass media of entertainment. Therefore, I want to recommend Dr. Ted Baehr’s Reel to Real.
- James Garlow, senior pastor of Skyline Church, San Diego, California

▼▲
I'm the author/artist and I want to review Reel to Real: 45 Movie Devotionals for Families.
Back
×
Back
×