EASTER SEASON SALE: Over 1,100 deals up to 75% off. Shop through March 30th. >
Recovering Biblical Manhood and Womanhood: A Response to Evangelical Feminism
Edited By: John Piper, Wayne Grudem
By: Various Contributors 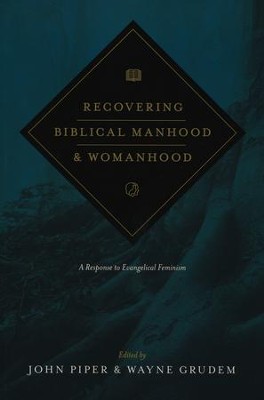 ▼▲
A controversy of major proportions has spread through the church. Recent generations bear witness to the rise of "evangelical feminism"--a movement that has had a profound impact on all of life, challenging some of our basic Christian beliefs.

In this new edition of recovering Biblical Manhood and Womanhood, an influential and award-winning best-seller, more than twenty men and women have committed their talents to produce the most thorough response yet to this modern movement. Combining systematic argumentation with popular application, this volume deals with all of the main passages of Scripture brought forward in this controversy regarding gender-based role differences.

Anyone concerned with the fundamental question of the proper relationship between men and women in home, church, and society will want to read this book. New preface included.

The rise of evangelical feminism challenges traditional Christian beliefs related to gender roles in society, the home, and the church. This comprehensive defense of complementarianism contributes to the debate with systematic argumentation and practical application.

Wayne Grudem (PhD, University of Cambridge; DD, Westminster Theological Seminary) is Distinguished Research Professor of Theology and Biblical Studies at Phoenix Seminary, having previously taught for twenty years at Trinity Evangelical Divinity School. He is a former president of the Evangelical Theological Society, a member of the Translation Oversight Committee for the English Standard Version of the Bible, the general editor of the ESV Study Bible, and the author of over twenty-five books.

Raymond C. Ortlund Jr. is the author of several books, including the Preaching the Word commentary on Isaiah and Marriage and the Mystery of the Gospel, as well as a contributor to the ESV Study Bible. He and his wife, Jani, have four children.

Vern S. Poythress (PhD, Harvard University; ThD, University of Stellenbosch) is professor of New Testament interpretation at Westminster Theological Seminary in Philadelphia, Pennsylvania, where he has taught for nearly four decades. In addition to earning six academic degrees, he is the author of numerous books and articles on biblical interpretation, language, and science.

Dorothy Kelley Patterson (DTheol, University of South Africa) is professor of theology in women’s studies at Southwestern Baptist Theological Seminary in Fort Worth, Texas, where her husband, Paige Patterson, is the president. She is the author of many books, an active homemaker, a frequent speaker and Bible teacher at women’s conferences, and a mother and grandmother.

▼▲
I'm the author/artist and I want to review Recovering Biblical Manhood and Womanhood: A Response to Evangelical Feminism.
Back
×
Back
×