Skip to main content
CYBER WEEK SALE! Spot great deals up to 88% off. >
Recovering from Biblical Manhood and Womanhood: How the Church Needs to Rediscover Her Purpose
By: Aimee Byrd
Stock No: WW0108719 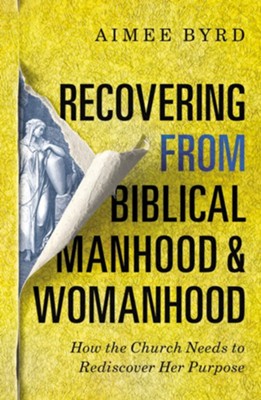 Recovering from Biblical Manhood and Womanhood: How the Church Needs to Rediscover Her Purpose

▼▲
Byrd explores the feminine voice in Scripture as synergistic with the dominant male voice. Steering a course between the extremes of radical feminism and biblicism, she puts forth the stories of prominent biblical heroines such as Mary and Elizabeth, and emphasizes the need for all believers to be active and equal participants in discipleship to Christ. 224 pages, softcover from Zondervan.

This book dismantles every mistruth that you've heard about the role of women in the Bible, her place in the church, and the patriarchal lie of so-called "biblical manhood and womanhood." In its place, Aimee Byrd details a truly biblical vision of women as equal partners in Christ's church and kingdom.

The church is the school of Christ, commissioned to discipleship. The responsibility of every believer—men and women together—is being active and equal participants in and witnesses to the faith. And yet many women are trying to figure out what their place is in the church, fighting to have their voices heard and filled with questions:

The answers lie neither with radical feminists, who claim that the Bible is hopelessly patriarchal, nor with the defenders of "biblical manhood," whose understanding of Scripture is captive to the culture they claim to distance themselves from.

Recovering from Biblical Manhood and Womanhood presents a more biblical account of gender, marriage, and ministry. It explores the feminine voice in Scripture as synergistic with the dominant male voice. It fortifies churches in a biblical understanding of brotherhood and sisterhood in God's household and the necessity of learning from one another in studying God's word.

Until both men and women grow in their understanding of their relationship to Scripture, there will continue to be tension between the sexes in the church. Church leaders can be engaged in thoughtful critique of the biblical manhood and womanhood movement, the effects it has on their congregation, and the homage it ironically pays to the culture of individualism that works against church, family, and a Christ-like vision of community.

Aimee Byrd is author, speaker, blogger, podcaster, and former coffee shop owner. Aimee is author of several books, including Housewife Theologian (P&R, 2013), Theological Fitness (P&R, 2015), No Little Women (P&R, 2016), and Why Can’t We Be Friends? (P&R, 2018). Her articles have appeared in First Things, Table Talk, Modern Reformation, By Faith, New Horizons, Ordained Servant, Harvest USA, and Credo Magazine and she has been interviewed and quoted in Christianity Today and The Atlantic. She is the cohost of Mortification of Spin podcast for The Alliance of Confessing Evangelicals and regularly blogs there as well. Aimee and her husband have three children and reside in Brunswick, Maryland.

▼▲
'What if I told you that so-called 'biblical manhood and womanhood' was not really 'biblical'? What if I told you that 'biblical manhood and womanhood' was in fact an artificial construct of white, suburban, affluent, middle-class culture in the post-World War II era with its weird marriage of consumerism and patriarchy. Curious? Well, if you're up to it, follow Aimee Byrd down the rabbit hole, and she will deconstruct every mistruth that you've been sold about the Bible and women, and then she'll give you a more biblical and genuinely Christian account of men, women, and ministry. But be warned! Once you go down this trail, there is no going back; you won't view marriage or ministry the same way ever again. This book could provide the gender reset that evangelical churches have needed for a long time. No, not a dour and dismal descent into liberalism but the beginning of a true recovery of the biblical vision of women as partners in the church of Christ and the gospel. Byrd is bringing down the #GenderReformation to crush 'biblical manhood' under the weight of its interpretive incredulity, its pastoral irresponsibility, its refusal to listen to female voices, and its captivity to culture.' -- REV. DR. MICHAEL F. BIRD, academic dean and lecturer in theology at Ridley College, Melbourne, Australia

'The biblical-manhood-and-womanhood movement has generated more heat than light because it has failed to recognize that its own pet theories of manhood and womanhood derive more from black-and-white TV of the 1950s--think of Timmy's mom and dad in Lassie--than from the Bible. What makes this obvious are the many studies on what it was like to be a man or a woman in the time of Barak and Deborah, Ruth and David, or the Syrophoenician woman and Jesus, or Priscilla and Paul in their Greco-Roman world. We now know that the so-called manhood-and-womanhood movement is a set of cultural ideas imposed on the Bible itself. Byrd offers here enduring wisdom and wit about how we as Christians ought to relate to one another as 'coed colaborers.'' -- SCOT MCKNIGHT, professor of New Testament, Northern Seminary

'With a deep reverence for Scripture and a sincere search for truth, Aimee Byrd peels back the layers of culturally informed teachings on gender that keep both women and men from flourishing in Christ and in relationship with each other. This is the book that Christians who have been misled by popular notions of biblical manhood and womanhood--but who still believe that maleness and femaleness are meaningful categories in the church, home, and society--have been waiting for.' -- KATELYN BEATY, author, A Womans Place

'Aimee Byrd has written a book that will impact the church-and-gender conversation for years to come. Recovering from Biblical Manhood and Womanhood doesn't only expose the emptiness of so-called 'biblical manhood and womanhood' teaching, it presents a vision of true Christian complementarity defined by empowered women, sibling love, and union with Christ. Saturated in Scripture and rooted in a strong theological tradition, this is the book that Aimee has been working toward for years. I thank God that it's here.' -- MARCOS ORTEGA, assistant pastor, Goodwill Church (EPC), founder of Reformed Margins and cohost of the Family Discussion podcast

'I am not a prophet nor the son of a prophet, but I have a prediction. Many people who haven't read Aimee Byrd's book will praise her for positions she does not hold and criticize her for things she does not believe. But let's hope I'm wrong. Why? Because it would be wonderful if all of us might listen attentively to a sister who is calling all believers--women and men--to grow in their love of Scripture even as she asks us to recognize our blind spots and problematic assumptions. Here is an author who cares deeply that our worship is biblical, trinitarian, and consistently leading to and promoting a holy communion of the saints.' -- KELLY M. KAPIC, author of The God Who Gives: How the Trinity Shapes the Christian Story

'After years of vigorous and insightful interaction, egalitarians and complementarians today have too often retreated to their own tribes, even setting up requirements for membership unlike any in the history of the church. Fortunately, there are also several recent writers who defy simplistic categorization or labeling, who are calling on the church to consider new and healthy directions with respect to just what the Bible does and doesn't teach about being faithful Christian women and men. Aimee Byrd is one of these writers, and people from every perspective on the topic can learn much from her study of Scripture and of history as well as her personal experience.' -- CRAIG L. BLOMBERG, distinguished professor of New Testament, Denver Seminary

'If there is a slippery subject in the church today, it's 'biblical manhood and womanhood.' We're confused by the disagreements, constricted by the 'rules,' and seemingly helpless to discern what's true. This is why Aimee Byrd's book is so important. Wading through the cultural murkiness, Byrd returns us to Scripture with theological rigor. I celebrate her strong voice and urgent plea to recover a better vision--for the good of the family and the church.' -- JEN POLLOCK MICHEL, award-winning author of Surprised by Paradox and Keeping Place

▼▲
I'm the author/artist and I want to review Recovering from Biblical Manhood and Womanhood: How the Church Needs to Rediscover Her Purpose.
Back
Back