EARLY CHRISTMAS SALE: Shop over 900 items up to 85% off through 9/29 >
Receiving from Heaven: Increasing Your Capacity to Receive from Your Heavenly Father - eBook
By: Kevin Zadai 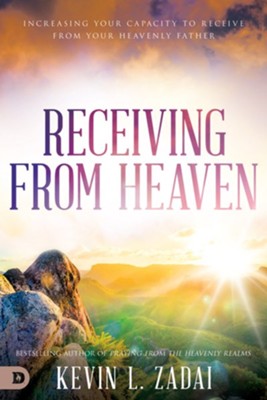 Receiving from Heaven: Increasing Your Capacity to Receive from Your Heavenly Father - eBook

▼▲
Master the Biblical art of receiving from Heaven.

Many Christians feel that their prayers produce no results, and that God remains distant, despite their pursuit of Him. Why? Because many are seeking blessings and realities that are already available and accessible!

The key to a fulfilling prayer life and an intimate relationship with God is not found in striving—it's found in simply receiving. In the Biblical art of receiving from Heaven, we simply say "yes" to the lavish blessings that Jesus has already made available to every believer.

Prophetic Bible teacher and bestselling author Kevin Zadai was an everyday Christian who was caught up in a heavenly encounter that dramatically changed his life. This experience opened the realities of Scripture to him in a new way, equipping him to share heavenly keys with everyday people so they too could walk in the fullness of favor, blessing, and victory that Christ makes available to every believer.

Kevin will show you how to:
Learn the art of receiving from Heaven and watch as every biblical blessing and promise comes to life for you!

▼▲
Kevin Zadai, ThD is dedicated to training Christians to live and operate in two realms at once—the supernatural and the natural. Called to ministry at age 10, he attended Central Bible College in Springfield, Missouri, where he received a bachelor’s degree in theology. Later, Kevin received training in missions at Rhema Bible College and a doctorate of theology from Primus University. At age 31, during a routine surgery, he found himself on the "other side of the veil" with Jesus in a heavenly visitation that forever marked his life. This encounter ushered his ministry into new dimensions of power, activation, and impartation. Kevin is retired after being employed by Southwest Airlines for 29 years; he and his wife, Kathi, reside in New Orleans, Louisiana, and are ordained by Dr. Jesse and Dr. Cathy Duplantis.

▼▲
I'm the author/artist and I want to review Receiving from Heaven: Increasing Your Capacity to Receive from Your Heavenly Father - eBook.
Back
×
Back
×