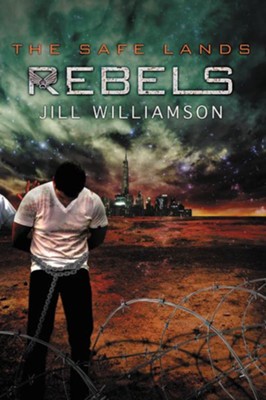 The remnant of Glenrock has been scattered. But they are not beaten.

The Safe Lands have long kept the true meaning of Liberation secret from their people. But after being sentenced to Liberation themselves, Mason and Omar soon discover the truth.

Levi watched his brothers’ public sentencing and tries to hold out hope they are still alive, He is forced to focus his attention elsewhere, however, when his new wife, Jemma, is captured and made the Safe Lands’ newest Queen. His only choice to save Jemma may be to take up Omar’s old role of undercover vigilante, leading the rebels in their quest to overthrow the government. But will Levi’s new role be enough?

Meanwhile, Jemma’s sister, Shaylinn, is ready to give birth to the "Safe Lands’" children &hellip; but not even Ciddah is sure they can be delivered safely in the midst of a rebellion. And Mason must face the fact Omar’s illness could be fatal.

If they can all unite their efforts, together they may be able to expose the Safe Lands’ lies to the people. But if they fail, they will all surely die.

▼▲
Award-winning author Jill Williamson returns with Rebels, the final book in her dystopian series. Three teen brothers–Omar, Levi, and Mason–decide how they will live in a land that is not their own, one where pleasure is valued more than human life and where many temptations make it difficult to stay true to their faith. In Rebels, after freeing the women and children from the Safe Lands, Levi and his wife Jemma lead their group underground to join the rebels Levi befriended. The new residents aren’t welcome among the rebels, and tensions escalate, especially since Ciddah (a Safe Lander) is among Levi’s group. But there are others still to rescue. During the next rescue attempt, Levi is betrayed, and Jemma is captured. Meanwhile, Omar and Mason are imprisoned and sentenced to immediate liberation. But what is “liberation”? A firing squad–or something more sinister? Can they be saved from their fate? Who are the Ancients? What happens when the rebels join forces to overthrow the Safe Lands Guild? Williamson creates a plausible futuristic world where believers are endangered, and most people live as if personal pleasure is the only thing of value. Unfortunately, they are seeing the ramifications of that choice. At the heart of this book is the theme of forgiveness, both giving and receiving it, and the difficulty of accepting its reality in one’s life. There are plenty of plot twists in this final book, even though the storylines are completed. Fans of teen dystopian fiction should like this series. Discussion questions make this a good selection for teen book clubs. Recommended for teen collections in school and public libraries. Carol R. Gehringer, worthy2read.wordpress.com -- Christian Library Journal

▼▲
I'm the author/artist and I want to review Rebels.
Back