Skip to main content
SPRING CYBER EVENT STARTS NOW: And it's a really BIG deal! Up to 88% off through 5/24>
For the Right Reasons: America's Favorite Bachelor on Faith, Love, Marriage, and Why Nice Guys Finish First
By: Sean Lowe
Stock No: WW018803 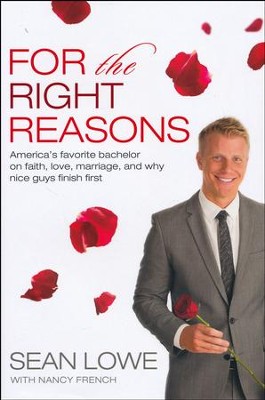 Sean Lowe, the star of ABC's The Bachelor and The Bachelorette, finally lets down his guard to expose what the cameras and microphones couldn't capture on the set. For the Right Reasons traces the minefields that he tiptoed through while struggling to honor his Christian convictions in the morally complex world of romance-reality television.

With disarming candor, the Texas-bred former football star reveals the dream-like highs and devastating lows that come with prime-time celebrity status. Along the way, he shares how the hard lessons he learned apply to the challenging journeys that each of us may take in life.

The “virgin Bachelor” Sean Lowe reveals the challenges of finding love while championing his Christian convictions in the morally complex world of reality TV.

After The Bachelorette broke his heart, Sean Lowe suspected his “nice guy” image hurt him. The show never emphasized it, but Sean committed to living according to biblical standards of sexuality, even as producers emphasized the risqué and promiscuous. A Texas boy from a Baptist home, Sean tells the story of how he went from a Division I college football player to a fan favorite on reality television, taking readers behind the scenes of The Bachelor and The Bachelorette to see the challenges of living out his values and faith—and ultimately winning his true love’s heart.

For the Right Reasons is about the journeys we all have to take in the real world, where being “good” is the right thing to do but sometimes doesn’t seem to be enough; where betrayal is commonplace; and where that thing called perfection is actually just a cruel myth. Sean learned a few things from his two seasons on the hottest romance shows on television, and he wants others to benefit from those lessons: good does eventually win, lies will be discovered, and “nice guys” do ultimately finish first.

Sean Lowe, one of the three finalists on Emily Maynard’s popular season of The Bachelorette, later starred in the 2013 season of The Bachelor. Credited by the New York Times for "reinvigorating the franchise," he has been voted America’s favorite Bachelor and is the only one to marry his match from the show. Sean and his bride, Catherine , live in Dallas, Texas, with their two dogs, Ellie and Lola.

▼▲
I'm the author/artist and I want to review For the Right Reasons: America's Favorite Bachelor on Faith, Love, Marriage, and Why Nice Guys Finish First.
Back
Back