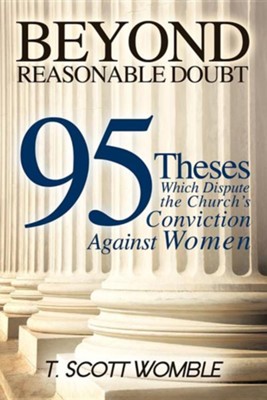 Beyond Reasonable Doubt: 95 Theses Which Dispute the Church's Conviction Against Women

▼▲
Beyond Reasonable Doubt is not just another book among many tackling the issues surrounding the role of women in the church. After witnessing discussions on this topic in settings as varied as the seminary classroom, the foyers in the local church, and even his own living room, Scott Womble sought to bring these perspectives into one holistic discussion. The result is a comprehensive resource which addresses theology, exegesis and everyday life. Utilizing the hypothetical setting of a courtroom, Womble argues that the case which sentences women to secondary roles in ministry demands a retrial. An accumulation of 95 solid arguments is presented on behalf of the women who need a defense attorney as they await the verdict regarding their place in the church. His 95 theses raise more than reasonable doubt and clearly show that women must be released into ministry. Scott Womble (B.S., Saint Louis Christian College; M. Div., Lincoln Christian Seminary) is professor of biblical studies at Saint Louis Christian College where he also serves as the Adults in Ministry Coordinator. Prior to joining the college in 2002, Womble served as full-time preaching minister in central Illinois for seven years. He still regularly fills the pulpit on Sunday mornings, having preached at over fifty churches. He is a regular book reviewer for the Stone-Campbell Journal. Womble is an avid sports enthusiast. Scott and his wife Lisa have been married twenty-three years and have two children, Amanda and Michael.

Building on the premise that the verdict against women in ministry has been reached prematurely, T. Scott Womble asks for a retrial. By taking the role of a defense attorney, the author makes it his aim to lay out a comprehensive argument in favor of women serving in positions of ministry in the church. Womble's desire is for leaders of local churches to have an opportunity to hear the defense that is often overlooked. This should lead to further study as well as healthy discussion rather than "heated arguments that cause wounds which lead to church splits" (20). The aim of the book is to present theological and biblical arguments in such a way that the reader would be convinced, as in a court of law, "beyond a reasonable doubt" (22), of the validity of the egalitarian perspective.

Womble is professor of biblical studies at Saint Louis Christian College. He served as a full-time minister prior to his academic career and continues to preach in churches on a regular basis. Although an egalitarian, Womble serves in a denomination that has yet to release women fully to use their gifts.

The text is structured around an extended courtroom metaphor that includes the intentional numbering of theses-as the book's title suggests, echoing Martin Luther. After establishing the parties involved and the facts of the case in section 1, Womble presents his opening statement. In the second section, the hermeneutical and theological foundations for the rest of the book are laid. With the thought that many of the differences of opinion within the body of Christ today originate from differing interpretations of biblical texts, Womble carefully begins his discussion in earnest with an overview of "sound interpretive method" (27-28). Although he then moves on to discuss points related to sound theology, the outline of his basic hermeneutical method does provide an important platform upon which he builds later in the book. In the third section, the author begins cross-examination.

Laid out on the table are the kinds of things that women hear today, such as, "they are equal in worth only" (thesis 11, p. 7Sff). The cross-examination continues by exploring common excuses for ignoring the issue and gains momentum with an expose of the inconsistencies of the patriarchal view. For instance, some churches that allow men to preach may also allow women to do the same, yet the terminology is different: She is merely "speaking" or "sharing her thoughts" (98). Other churches may prohibit a woman from teaching their own congregation, yet proudly support female missionaries who teach men on the foreign field (103).

The presentation of biblical evidence in favor of the egalitarian view is found in sections 4 and 5. Key texts in both the Old and New Testaments are examined. Womble's defense comes to a conclusion in the last two sections, in which practical issues are explored, and a verdict is made. Thesis 95 provides a rousing grand finale with a parade of women who served in ministry throughout history.

While each thesis provides a solid argument, Beyond Reasonable Doubt shines the brightest when it comes to the treatment of the biblical text. Womble provides thoughtful discussion on passages that have been at the heart of the gender debate, including Genesis 1-3, Galatians 3:28, 1 Timothy 2:9-15, 1 Corinthians 11:3-16, and 1 Corinthians 14:34-35. His insights are fresh and engaging, reflecting both strength in contextual exegesis and an ability to communicate dearly to a broad audience. His excellent observations on the biblical text should provoke the reader naturally to deeper thought and study. In this regard, I believe Womble reaches his objective.

After reading more than two hundred pages defending the egalitarian perspective, I was initially surprised to see repeated references to the "husband's leadership role in marriage" in chapter 12. At first, it seemed inconsistent with thesis 56, which states that "'head' does not mean 'authority'" in 1 Corinthians 11:3. Yet, Womble goes on to explain that, in the full context of the passage at hand (Eph. 5:22-24), the way in which a husband is to lead is in sacrifice for his wife as Christ sacrificed himself for the church. In this way, the term "leadership" is redefined and brought under the umbrella of mutual submission" (244).

Beyond Reasonable Doubt is a valuable resource for the church. The book can be read as a whole or used as a reference for particular passages or topics. Its presentation of the case for egalitarianism is a bold, well-researched defense covering a wide range of aspects of the gender debate that provides an excellent overview of the discussion about women.

---Jennifer Creamer, graduate student at Gordon-Conwell Theological Seminary, and has taught with the School of Biblical Studies program at the University of the Nations on three continents.
---Used with permission from Christians for Biblical Equality

▼▲
I'm the author/artist and I want to review Beyond Reasonable Doubt: 95 Theses Which Dispute the Church's Conviction Against Women.
Back
×