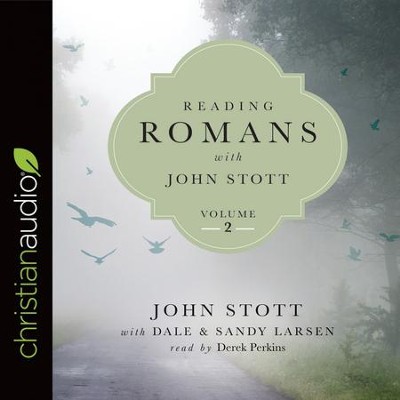 Narrated By: Derek Perkins
By: John Stott, Dale Larsen, Sandy Larsen
More in Reading the Bible with John Stott Series
christianaudio / 2016 / Audio Download
Write a Review
In Stock
Stock No: WWDA24841-CP
Buy Download Our Price$9.98
In Stock
Stock No: WWDA24841-CP
christianaudio / 2016 / Audio Download
Add To Cart
of These in Your Cart

Product Close-up
* This product is available for purchase worldwide.

▼▲
Paul's letter to the Romans has for two thousand years been a touchstone for all who want to understand the power of the gospel and the righteousness of God revealed from heaven. The truth in Romans transforms our thinking and convicts our hearts as we discover the power of the gospel for every area of our life and our world. In this volume, the second half of John Stott's The Message of Romans is condensed into brief readings suitable for daily use which take us passage by passage through the Scripture text. Including ten weekly studies for individuals or groups, this book covering Romans 9â·16 allows readers to enjoy the riches of Stott's writings in a new, easy-to-use format. The remainder of Romans is presented in the companion to this volume. John Stott was one of the most beloved and masterful Bible teachers of the last fifty years. His books have sold in the millions. Christians on every continent have heard and read his instructive and inspiring expositions of Scripture. The books in the Reading the Bible with John Stott series condense the essential message of Stott’s teaching, largely drawn from his Bible Speaks Today volumes, and present it in a format suitable for daily reading. Questions at the end of each section make these books even more useful for individuals or groups.

▼▲
John R. W. Stott (1921-2011) has been known worldwide as a preacher, evangelist and communicator of Scripture. For many years he served as rector of All Souls Church in London, where he carried out an effective urban pastoral ministry. A leader among evangelicals in Britain, the United States and around the world, Stott was a principal framer of the landmark Lausanne Covenant (1974). His many books have sold millions of copies around the world and in dozens of languages. Stott's best-known work, Basic Christianity, has sold two million copies and has been translated into more than 60 languages. Other titles include The Cross of Christ, Understanding the Bible, The Contemporary Christian, Evangelical Truth, Issues Facing Christians Today, The Incomparable Christ, Why I Am a Christian and Through the Bible Through the Year, a daily devotional. He has also written eight volumes in The Bible Speaks Today series of New Testament expositions. Whether in the West or in the Two-Thirds World, a hallmark of Stott's ministry has been expository preaching that addresses the hearts and minds of contemporary men and women. Stott was honored by Time magazine in 2005 as one of the "100 Most Influential People in the World" and was named in the Queen’s New Years Honours list as Commander of the Order of the British Empire. In 1969, Stott founded the Langham Trust to fund scholarships for young evangelical leaders from the Majority World. He then founded the Evangelical Literature Trust, which provided books for students, pastors and theological libraries in the Majority World. These two trusts continued as independent charities until 2001, when they were joined as a single charity: the Langham Partnership. Langham's vision continues today to see churches in the Majority World equipped for mission and growing to maturity in Christ through nurturing national movements for biblical preaching, fostering the creation and distribution of evangelical literature, and enhancing evangelical theological education.

Dale Larsen is a writer living in Rochester, Minnesota. He and his wife, Sandy, have written more than thirty books and Bible studies together including Living Your Legacy and more than ten LifeGuide® Bible studies. They have also coauthored eight N.T. Wright for Everyone Bible Study Guides with Wright.

Sandy Larsen is a writer living in Rochester, Minnesota. She and her husband, Dale, have written more than thirty books and Bible studies together including Living Your Legacy and more than ten LifeGuide® Bible studies. They have also coauthored eight N.T. Wright for Everyone Bible Study Guides with Wright.

▼▲
I'm the author/artist and I want to review Reading Romans with John Stott, Volume 2 - Unabridged edition Audiobook [Download].
Back