Skip to main content
On Faith, Rationality, and the Other in the Late Middle Ages:: A Study of Nicholas of Cusa's Manuductive Approach to Islam - eBook
By: Gergely Tibor Bakos
Stock No: WW111738EB 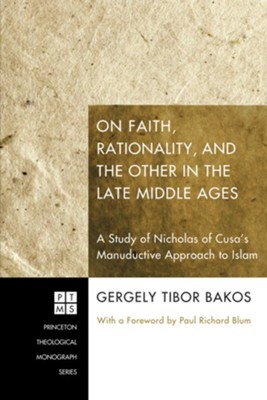 On Faith, Rationality, and the Other in the Late Middle Ages:: A Study of Nicholas of Cusa's Manuductive Approach to Islam - eBook

▼▲
On Faith, Rationality, and the Other in the Late Middle Ages is an investigation of Nicholas of Cusa that seeks a deeper understanding of this important medieval intellectual and his importance for us today. One of Gergely Bakos's primary aims in this study is to understand Nicholas of Cusa's important and underexamined dimensions of his approach to dialogue with Islam. The framework and the methodology that informs this investigation was inspired by the late Professor Jos Decorte (1954-2001), a Flemish philosopher and mediaevalist at the Catholic University of Leuven in Belgium. Bakos carefully exposits his method of approaching medieval thought (Part One) and then applies and tests this method in practice (Part Two). The most extensive part of this study offers a sketch of the historical background of Nicholas's dialogue with Islam and investigates what possibilities this approach offers. All of this is placed in dialogue with two other mediaeval approaches to Islam (Thomas Aquinas and Ramon Lull). The final chapters discuss Nicholas of Cusa's project from a perspective offered by his mystical theology. The book culminates in an exploration of the possibilities of Nicholas of Cusa's approach by testing the framework of the study. Finally, the author evaluates the application of his own approach (Part Three). The study ultimately has two purposes: to contribute to a better understanding of Nicholas of Cusa's thought, on the one hand, and, on the other, to test a particular methodology and interpretative framework for the understanding of mediaeval culture.

▼▲
Gergely T. Bakos is a Benedictine monk holding the Chair of Philosophy at the Sapientia Theological School of Religious Orders in Budapest, Hungary.

▼▲
I'm the author/artist and I want to review On Faith, Rationality, and the Other in the Late Middle Ages:: A Study of Nicholas of Cusa's Manuductive Approach to Islam - eBook.
Back
Back