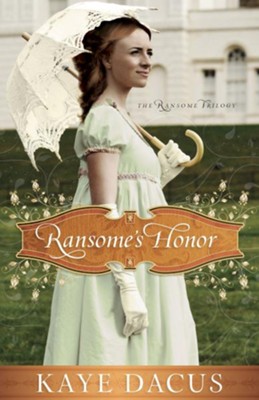 ▼▲
Captain William Ransome never allows women aboard his ship. Julia Witherington must marry immediately to receive a large dowry. The only man she won't wed is Ransome---but he's the only choice her father will approve! Do these two have anything in common?

The Ransome Trilogy from exciting new author Kaye Dacus combines the wit, romance, and social commentary of Jane Austen with the sea-faring adventure of Horatio Hornblower.

July 1814. The war with France has ended, and Captain William Ransome, known for never letting women aboard his ship, has returned to Portsmouth, England. Julia Witherington, considered an old-maid at 29, discovers that she must marry immediately to receive a large dowry. Julia knows that the only man she doesn't want to marry is William Ransome. And the only man her father will approve of is William Ransome.

When the couple strikes a financial deal to feign marriage for one year, the adventure begins. These stubborn people face humorous and hard situations that reveal what else they have in common a growing affection for one another. This intriguing tale of faith and loyalty is a wonderful new offering for readers of all genres.

▼▲
This first volume in Dacuss Ransome Trilogy combines an engaging period story with charming characters, and likely will leave Christian romance fans wanting more. In 1802, William Ransome, a young lieutenant in the Royal Navy, is presumably on the verge of marrying his captains daughter, Julia Witherington, when, concerned he would be doing so for financial security, he dashes her hopes by deciding not to propose. Dacus picks up the story 12 years later when Julia is 29 and still single and Ransome is a captain returned from the war with France. Circumstances throw them together again in Portsmouth, England, and what follows is a predictably Austenesque romance between two people obviously meant for each other, but fighting the inevitable. Adding to the tension are conspiring relatives who want Julia to marry a fortune-hunting cousin in need of her money. Dacuss descriptions of navy life and her character sketches are most appealing, but her references to prayer and the Bible that provide Christian elements in the novel sometimes seem forced and more like frosting than essential leaven. (July) Copyright 2009 Reed Business Information.

▼▲
I'm the author/artist and I want to review Ransome's Honor - eBook.
Back
Back