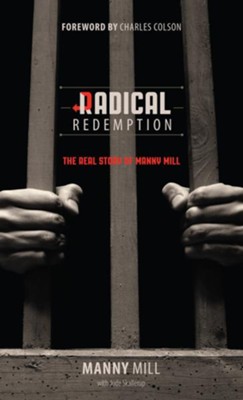 "The life and ministry of Manny Mill is another evidence that a reformed vision of God’s sovereign grace ignites radical, risk-taking ministries of mercy, not passive fatalism. May his story set ten thousand captives free—including those who have never been in prison." — John Piper, founder, Desiring God Ministries

"I could have been dead so many times. I always spent more money than I had, I was always in over my head, and I was always involved in too many things at one time&hellip;Everything I did was with me in mind." — Manny Mill

Descending into a life of debauchery, Manny Mill found himself teetering on the edge of personal and financial disaster.

In this candid and vividly personal book, Manny tells how His pursuit of pleasure led him to the depths of human despair. A declared fugitive of the law, he was running from the FBI when he ran into Christ and a life of radical redemption. Manny’s experiences will thrill you. His faith will inspire you. And his words will challenge you to think about your life, your relationship with the God of the universe, and your own need for a radical redemption.

▼▲
MANNY MILL is chief executive officer of Koinonia House® National Ministries (KHNM)m whose mission is to bridge the gap between the Christian inmate and the local church. For almost 25 years, KHNM has been facilitating the integration of the former inmate into the church, workplace, and society through biblical discipleship. Manny graduated from Wheaton College (B.A., M.A.) and has been privileged to proclaim the Gospel in churches, schools, conferences, and especially behind prison walls in the United States and abroad. The father of five adult children and grandfather of six, Manny resides with his wife, Barbara, in Wheaton, IL.

▼▲
I'm the author/artist and I want to review Radical Redemption: The Real Story of Manny Mill / New edition - eBook.
Back
×
Back
×