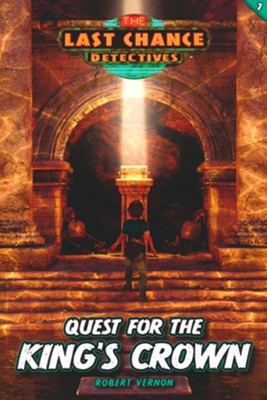 Quest for the King's Crown

▼▲
The Last Chance Detectives are searching for a long-lost treasure, but they’re not the only ones.

In book seven of the Last Chance Detectives series, readers learn that people aren’t always what they seem—and that some treasures are worth more than gold.

Mike and his friends come across an ancient artifact that could unlock riches beyond their wildest dreams. Those dreams are threatened, however, by an unexpected break-in that has the local sheriff puzzled. When a mysterious stranger shows up in town, Mike, Winnie, Ben, and Spence wonder if they are in more danger than they realized.

Their hunt for the treasure becomes a race against time as the Last Chance Detectives come face-to-face with perhaps their greatest foe ever! Quest for the King’s Crown is a story of heart-pounding action, age-old mysteries, and several unexpected twists. Does the gang have what it takes to meet this challenge?

The Last Chance Detectives won’t stop until the mystery is solved!

▼▲
I'm the author/artist and I want to review Quest for the King's Crown.
Back
Back